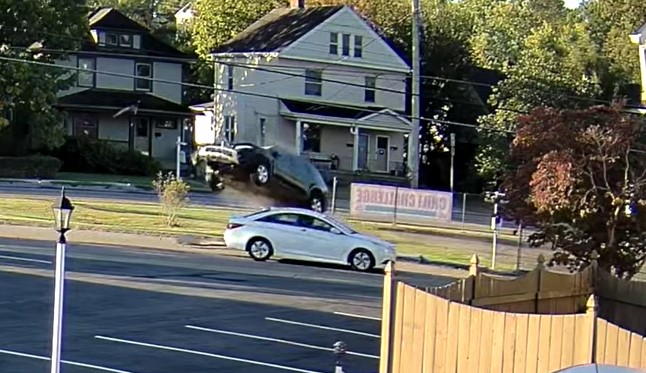 A priest in Ohio counts his blessings after escaping a potentially catastrophic disaster.

On his approach to Mass on October 2, Father John Bok’s 2014 Hyundai Sonata was nearly struck by an airborne SUV, the priest wrote on The Franciscan Friars’ website.

The 87-year-old Franciscan priest told the Catholic News Agency that he was approaching St. Andrew Parish in Milford at 8:40 a.m. when he witnessed a young guy pass out behind the wheel following a seizure.

According to him, the other driver’s vehicle veered off-road and was on a collision path with Bok’s driver-side door.

The priest stated that the other driver’s vehicle jumped a curb and drove through a yard as it approached Bok’s vehicle.

Bok, 87, told the Catholic News Agency that his survival was “a miracle.”

The “We Are Franciscans” YouTube page uploaded footage of the event showing the victim’s automobile striking a pole before launching over the other driving vehicle.

Bok, a former physics instructor, reportedly told the Catholic News Agency, “I had no idea the automobile had driven on top of me.” “I was staring ahead, and it was above and to my left.”

The priest added in his article, “I assumed it was a giant bird or something and continued on my way to the Mass.”

Later that day, Bok stated that the son of a local funeral home proprietor, who is also a police officer, showed him the video of his near-miss. The priest wrote, “I could not believe what occurred.”

According to Bok’s post, the youngster was transferred to a hospital and survived. It is unknown if the boy sustained any injuries as a result of the collision.

Bok, on the other hand, emerged unhurt from the encounter. He stated that he is “very grateful to God.”

In his statement on The Franciscan Friars’ website, he asked, “Why was the pole standing in that exact location with no attachment?”

“How could it raise the boy’s car about 5 feet into the air and propel it over my vehicle? So many questions.”