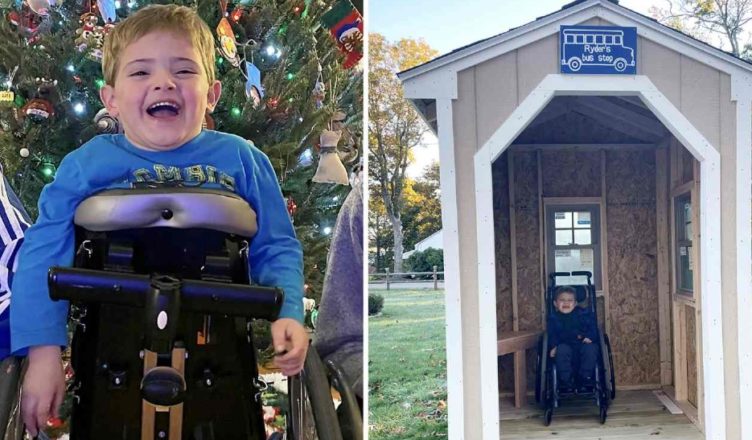 After witnessing that a five-year-old kid who uses a wheelchair got wet while waiting for the school bus in the winter, teenagers constructed a shelter for him.

Ryder Killam, age 5, has been exposed to rain, wind, and snow for around 15 minutes every day, with only a patio umbrella for protection.

Local students in Bradford, Rhode Island, however, upon learning of his dilemma, constructed a bus shelter for the bottom of his driveway during their construction courses.

Tim, the father of Ryder, stated, “Ryder uses it daily before school, and his nurses wait in it daily for his return home.

He also enjoys using it as his fort from time to time.

This endeavor demonstrated that there is still a great deal of goodness in this world and in this town.

He reported using a wheelchair at the age of two…. 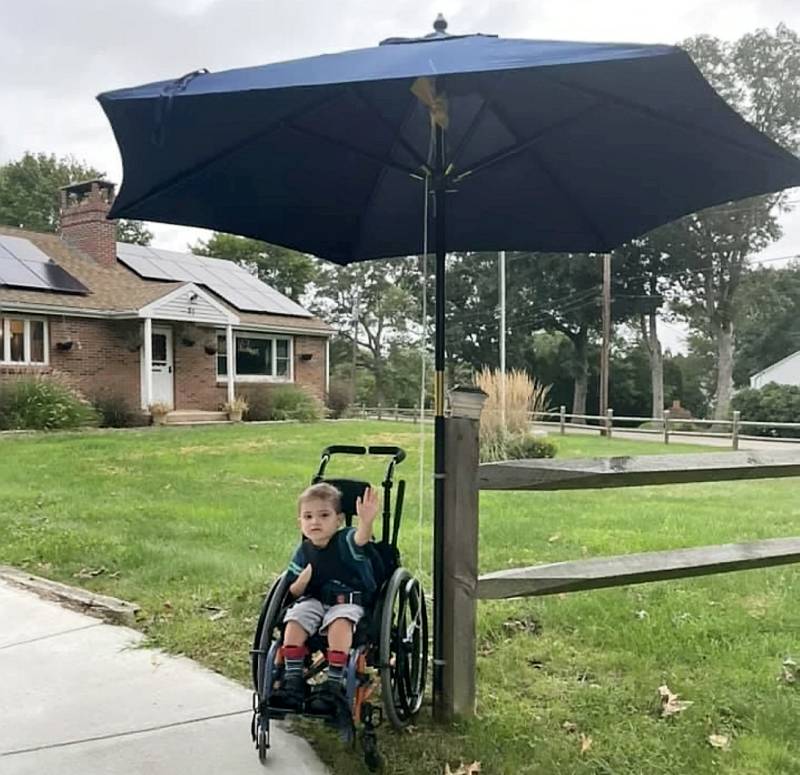 In June 2019, he began attending inclusionary preschool at Dunn’s Corner Elementary, and his parents Tim and Nikea had to push him 75 feet to the end of the road every day to wait for his school bus.

As he was unable to dash for the bus like his peers if he was running late, Ryder often had to wait up to 15 minutes outside in whatever weather there was.

Tim decided to install a patio umbrella at the end of his driveway to provide protection from the elements in September of this year, just as Ryder began kindergarten.

He stated, “The difficulty with the wind and autumn weather in New England is that it wasn’t very effective unless it was a rainy day with no wind; otherwise, he would still get wet and cold.”

They decided to go out to their neighborhood to see if anyone had any means of protecting Ryder from the weather.

Tim, who operates a maritime electronics business, said, “I posted a request on Facebook to see if any of my friends or their contacts owned an old bus hut.

“I notice them sporadically on people’s properties and assumed that whoever owned them had grown children who no longer needed it.

“After the post, a WPS member recommended I contact the Westerly High School construction class to see if they would be interested in building Ryder a bus stop hut.”

Tim sent an email to Dan McKena, who has taught construction technology at Westerly High School for the past 27 years, wondering whether he would be interested in this type of project.

“He replied, ‘Absolutely,’ and then collaborated with his pupils to design and construct the hut,” he explained.., 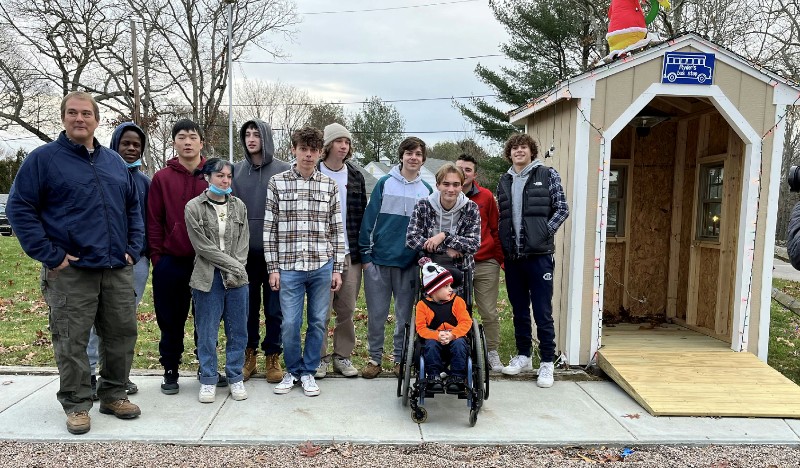 Three of Mr. Mckena’s students worked diligently on the project for several weeks, acquiring new skills via YouTube as they constructed the building, motivated by the cause and the impending snowfall.

Home Depot supplied $300 worth of wood for the project, but the Kilmans spent $600 on the other components. They were kept informed with images throughout.

Six weeks later, on November 2, the 58-foot hut was eventually delivered to Ryder’s home. It was designed to accommodate Ryder, one of his parents, or a nurse comfortably.

Tim remarked, “We were astonished by how much larger it was than we had anticipated; Ryder and an adult can comfortably accompany him.”

“Ryder’s initial response was ‘Holy Cow!’; he adored it and wants to hang out in it frequently.”

The family sent a photograph of Ryder at the bus shelter and expressed appreciation for the youngsters’ efforts. We’re confident that they were happy to see how their project benefited others.