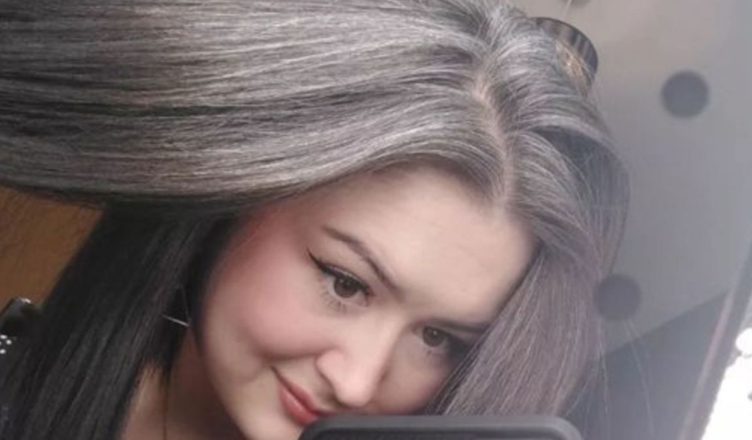 A young woman said that she feels “more powerful” now that she has gray hair, and she wants to break the stereotype that being young and gray is a bad thing.

Gray hair is a normal part of getting older, but Lauryn Caldwell’s started turning gray when she was only 16 years old, which was much earlier than expected.

Lauryn used to have brown hair, but when she was a teenager, she started to get grey hairs.

When she was 18, the 22-year-old started dying her hair to cover up the gray. She had to dye it every three weeks to keep the color.

But when she turned 20, she gave up the dye and let her natural hair color show.

Lauryn said that when people at school saw her gray hair for the first time, they made her feel “uncomfortable.” 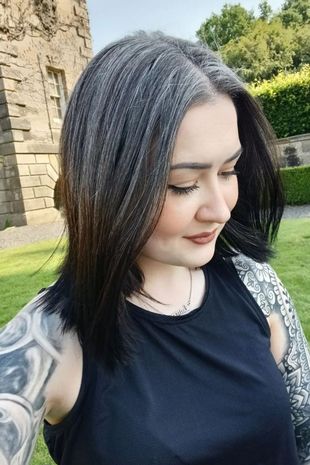 She said to Glasgow Live: “I noticed when I was 16 and in high school, when people would point them out, it made me feel awkward. I think it’s because there aren’t many young people with gray hair, and I was the only one.

“When a girl who sat behind me in class noticed that I had gray hair, she asked me why. She said I was too young for that, but I have it now, so I guess she was wrong.

“My parents didn’t get gray hair young. Even though my dad’s mom went gray young, so it could have come from her.”

Lauryn said that she would pluck out her gray hairs before dying it to get rid of them.

She also said: “My parents wouldn’t let me dye it, so I would spend hours plucking them out in front of the mirror. They would tell me to just go along with it and not worry about it.

“Then, when I was 18, I dyed it black. My hair is naturally dark, so when the gray started to show, it looked really different against the black.

I was so determined not to go gray that I dyed it every three weeks. I always made sure it was very dark and full of the black dye.

“However, doing this really hurt it because I was dying my whole head, not just the roots, and each box cost me £9.”

Lauryn decided to stop dying her hair all the time in April 2021 because she was tired of how much work it was.

At first, she tried to get rid of the black dye in her hair, but that left her with “horrible” red undertones.

She said that’s when people told her to just let it grow on its own and see what happens.

Lauryn was trying to accept her natural hair when she found a group of women called the “silver sisters” who helped her.

She told me: “I decided to look for other women with gray hair, and I couldn’t believe how many there were. I found a group of women who support each other and call themselves the “silver sisters.”

“Now that I care for my hair so much more, it looks so much better. I never used heat protection before, and I also used the wrong shampoo with silicones, which made my hair even worse.

I also give it regular oil treatments and care for it a lot more now.

“I’m now more likely to take better care of it because I want it to look better.”

Even though Lauryn is much more comfortable with her natural hair now, she still doesn’t like it sometimes “There are still times when I look at it and don’t like it, but that’s normal because I sometimes felt the same way when I dyed it.

But now that I’ve accepted it, I feel better.

“My family, especially my parents, were very supportive of my choice. They always told me that there was nothing wrong with it and that I should just let it be the color it is and go for it. 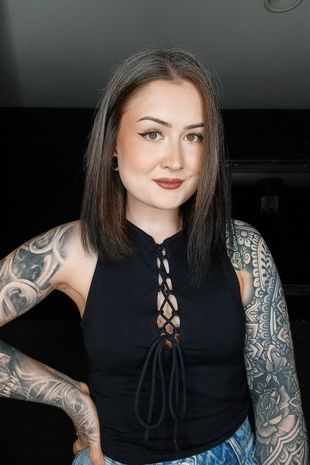 Lauryn used to be embarrassed by her natural hair, but now she gets a lot of compliments on it. She also: “At first, no one told me what they thought.

People would just stare at my hair. People would look at the top of my head and not say anything, especially when I worked in retail.

“But I’ve been hearing a lot of good things about myself lately. I think it’s because it’s grown out a lot more now, so the whole color can be seen and people tell me how nice it looks.

I guess I won’t have to worry about it when I’m older because I’m already doing it.”

Lauryn loves her silver hair and wants to encourage other people to do the same.

She said: “I want to show other young girls that it’s okay to love their gray hair. People of all ages send me messages telling me I’ve inspired them or that they like my hair and want theirs to look like mine.

“Society doesn’t show enough people who are young and old, and I want to help break the stigma that comes with it. I think we can do that as Silver Sisters.

Break down what people think about gray hair one strand at a time.

“It gives me a lot more confidence because I remember how helpless I felt when I couldn’t dye my hair, and I hope other people will feel the same way about theirs.

“When I couldn’t dye my hair, I didn’t feel confident, but now that I can, I want more young girls to show their natural gray hair, even though we’re told it’s not normal.

“Accept it, and don’t be afraid to let your natural sparkle shine through.”