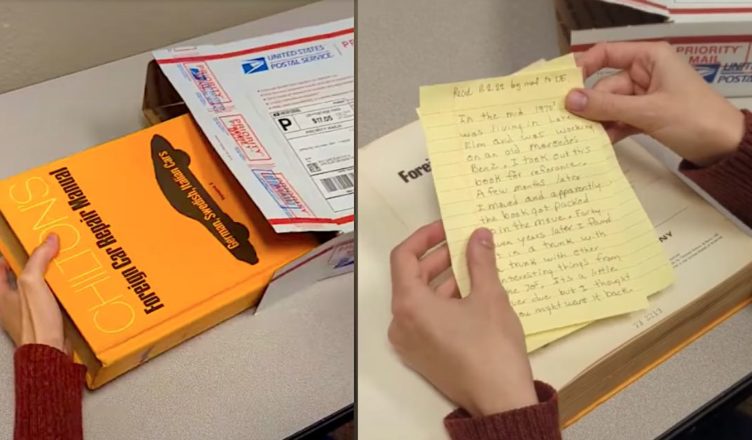 He returned the book nearly half a century later with an apologetic letter and a donation to cover the cost of a new book.

He returned it anonymously and via mail—”wisely,” according to local television station WREG Memphis, “thereby avoiding the disapproving look of any librarians at the front desk.”

The book was “Chilton’s Foreign Car Repair Manual,” and it was checked out in 1975 from the Washington County Library’s Lake Elmo location, and it provided the accompanying explanation:

“I was living at [Lake Elmo] in the mid-1970s and working on an old Mercedes Benz.” I took this book out for reference.

A few months later, I relocated, and the book was seemingly lost in the process. I discovered it 47 years later… in a trunk with other interesting items from the 1970s.

“It’s a little late, but I thought you might want it back,” wrote the borrower.

“Please accept my apologies to anyone around Lake Elmo who has worked on an old Mercedes in the last 47 years.” I can’t pay the late fee, but I’ll send you enough for a new book.”

The librarians contacted were simply relieved to get the book returned and appeared amused by the gesture.

On the library’s Facebook page, they stated that they no longer impose daily late fees, but only flat replacement rates if a book is lost or damaged.

They want to use the funds to purchase a more recent edition, as the pages of the returned book were as yellow as grain mustard, and the drawings were still in black and white.