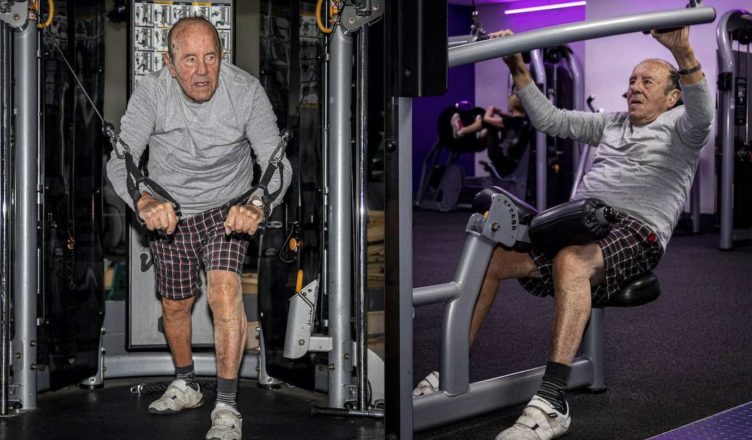 A 94-year-old retiree continues to go to the gym twice a week for a two-hour workout and has no plans to stop.

“Super” The gym is Mario Sanna’s “second home,” and the gym rats are his “second family.”

The former railway engineer claimed that his job laying train tracks kept him in shape, but he fell in love with the gym after starting to go to stay healthy after retiring.

That was thirty years ago. His typical regimen consists of exercise cycles, rowing machines, leg presses, and biceps curls, but he’s not beyond a pilates session.

“I use everything the gym has to offer, from spinning classes to lifting weights and walking on the treadmill,” Sanna explained.

“The body, in my perspective, needs to move. Even when I’m sleeping, I’m probably moving around. It’s a machine all by itself. It starts to decay if you keep it inactive.”

If the name didn’t give it away, Sanna began working for British Rail in 1954, two years after arriving in the UK from Sardinia, Italy.

And in those early days, the physical exertion required to haul heavy tracks around had kept him in good form.

When Mario eventually retired in the early 1990s, he realized he needed a new way to stay fit and purchased his first gym membership.

Only a vision problem keeps him from driving to the gym as regularly as he would like. He hopes to return more frequently following surgery, but for the time being, a buddy picks him up on Friday and Monday.

“I worked every Sunday since I was getting married at the time and needed a lot of money,” he says. “It was always highly manual labour.”

“I always think I need to extend my legs because they carry the rest of my body, and that’s one thing I’ll treat as number one,” he explained, going over his daily regimen.

“Then I’ll do the rest of the body, from the knees to the arms.”

“I also do Pilates and anything else that helps me becoming physically fitter than I am currently.” I’ll also go on the wires and hoist a 25kg bar.

I typically spend one to two hours at the gym. However, if the coffee machine is operational, I may stay for two and a half hours.”

In America, senior healthcare is turning away from cardiovascular exercise like brisk walking or swimming and toward weightlifting, which not only raises your heart rate like an exercise bike but also helps maintain bone density and fights muscle atrophy.

Mario described his gym pals as “family,” and he just celebrated his 94th birthday with a group of them.

“Everyone wishes to see you all the time. “It’s almost like a family,” he remarked. “They had a celebration for my birthday—and this is where I went.” They had a party here.”

Mario claims to be the oldest person at his gym, but he recommends that other seniors give it a shot if they want to stay in shape.

“I believe I’m the oldest. I would encourage it to anyone, especially if they are alone, to get out of their house and do something.”