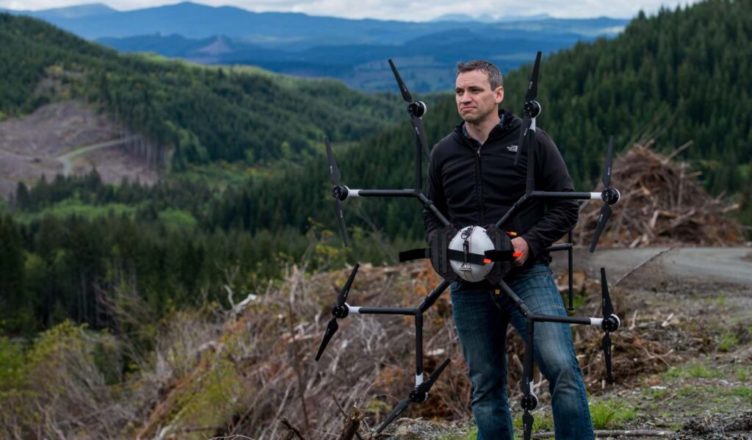 What are your choices for rebuilding what has been destroyed when the forest on your property is wiped out by a wildfire?

DroneSeed will deploy an army of seed-spreading drones in the air to plant the seeds for a new forest on top of the ones that have been burned down.

The drones have a combined weight of nearly 100 pounds, carry 57 pounds of tree seeds, and work in teams of five using satellite-guided software to locate hundreds of “microsites.”

These microsites are regions in which it is anticipated that trees will grow the healthiest.

DroneSeed is the only company in the world with a license from the Federal Aviation Administration to operate “heavy lift drone swarms.”

With this license, they are able to seed the ground six times faster than it is possible to plant seedlings by hand, covering approximately 40 acres per day at a cost of between $275 and $400 per acre.

Because of this, the cost of planting seedlings can be reduced by between 60 and 70 percent in comparison to the cost of traditional reforestation.

“We are always looking for new ways to innovate, especially when it can help us increase the pace and scale of habitat restoration to benefit both nature and people,” says Jay Kerby, Project Manager at The Nature Conservancy, which was able to contract DroneSeed for Oregon state reforestation after a recent fundraising event.

“We are always looking for new ways to innovate, especially when it can help us increase the pace and scale of habitat restoration to benefit both nature and people,” says Jay Kerby.

The company’s software is now undergoing beta testing, but the team believes it is a game changer that has the potential to be used to completely alter the playbook for how to battle global climate pollution.

There has been a lot of slash and burn agriculture around the world; consequently, how do you go out and replace things in a way that is both cost effective and efficient? According to Grant Canary, Chief Executive Officer of DroneSeed, “This is exactly where our technology shines.”

Restoration on public land following wildfires is an obvious implication, and if DroneSeed were hired for this work, it would save a significant amount of money for the taxpayers. However, the government does not own all of the forests in the United States, and DroneSeed might be of great assistance to private forest owners.

Those whose livelihoods depend on the forests for the production of lumber, honey, resin, mushrooms, or any number of other agroforestry goods stand a very good possibility of seeing their businesses come to an end in the event that a wildfire sweeps across their territory. However, the enormous amount of labor, time, and costs that are saved by DroneSeed’s technology provides not only their forests but also their lives a chance to regrow.