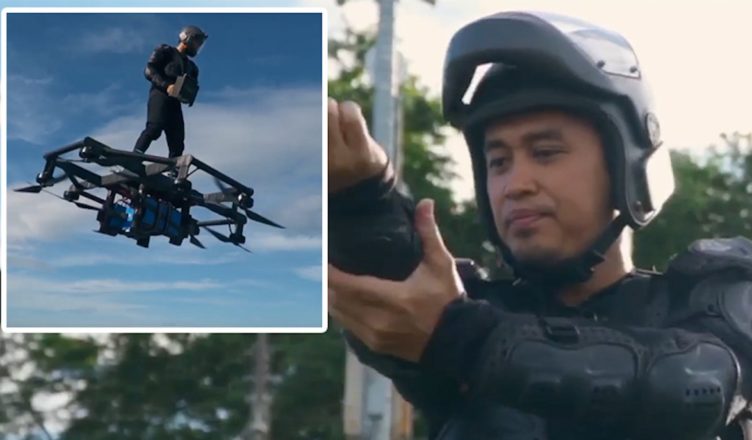 Watch the video below….

It appears that a hoverboard creator in the Philippines in his forties has established a new world record for the longest flight ever achieved by a hoverboard.

From a beach, Kyxz Mendiola took off in his personal aircraft, which he called the Koncepto Milenya, and flew for seven minutes and 22 seconds, covering a distance of 1.79 miles or 2.89 kilometers.

The video was captured on July 10 in the province of Zambales, Philippines, and shows a Filipino man who is interested in flying cars and drones gliding to a height of 30 feet above the earth over water and fishing boats while the water rippled below him.

According to reports, the flight broke the Guinness World Mark that had been held by a Frenchman named Franky Zapata, who achieved the record in 2016 by flying a jet-powered hoverboard over a distance of 2.25 kilometers.

“The data from our flight showed that we had actually achieved 2.89 kilometers. “I just couldn’t believe it,” exclaimed the ecstatic creator who also worked as a hip-hop dancer professionally.

“We were blown away by how much it exceeded our expectations.”

“Our initial objective was to fly for a distance of 2.5 kilometers. It was so daunting, and I simply could not believe that it would get that far.

The accomplishment has not yet been approved by Guinness World Records, but it has been sent in by the team responsible for its creation so that it can be verified.

Mendiola shared her advice with the next generation, saying, “My message to the young generation is to not let other people stop you from reaching your dreams.”