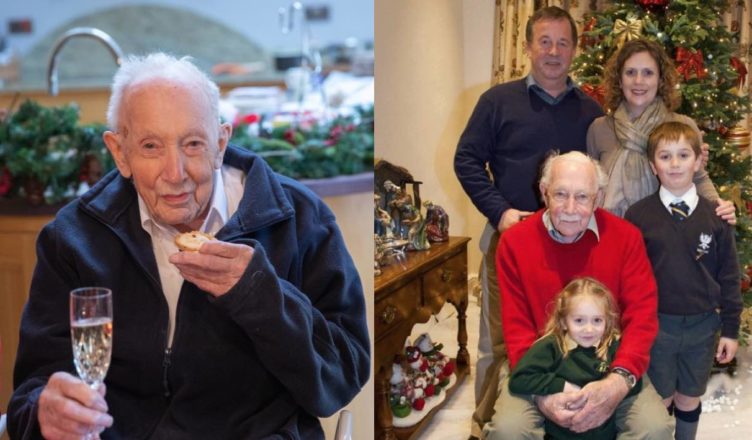 During the initial COVID-19 lockdowns in England, the late army captain Sir Tom Moore, who was 99 years old at the time, attempted to raise money for NHS Charities Together by walking across his lawn one hundred times.

This was done in an effort to raise awareness.

Now, in the belief that people need more upbeat and encouraging news in their lives, his family is following in his footsteps by launching a Christmas campaign that invites anyone to share stories of individual moments of kindness they’ve received throughout the course of their life.

This follows in the footsteps of his father, who also believed that people needed more upbeat and encouraging news in their lives.

To “honor the everyday acts of generosity that so frequently cost nothing to the donor, but mean so much more to the receiver,” the family has put together a campaign called “A Gift of Kindness.”

A message board can be found on the homepage of their website.

This board provides visitors with the option to thank someone who has done something kind for them or share a happy memory of a good act that they have experienced in the past.

Hannah Ingram-Moore, daughter of Captain Sir Tom, reflected on her father’s life and stated, “My late father Captain Sir Tom lived a long and fulfilled life that was filled to the brim with joy, deep sadness, love, grief, hope, positivism, and kindness.”

“He had a deep and abiding faith in the essential benevolence of people.

With this in mind, A Gift of Kindness is a place for you to share your stories of kindness, to share joy and hope with others by recalling any tiny act of kindness that was shown to you, or someone you know, and how it made you feel.

Moore’s low-key intra-garden rally in the year 2020 captivated the nation’s interest and finally resulted in the donation of almost 38.9 million pounds to the National Health Service of Britain.

In addition, Moore was awarded a knighthood for his efforts.

This Christmas, everyone can give the gift of compassion to someone else. In the middle of the epidemic, Captain Tom Moore advised those around him to “above all…be compassionate” when confronted with opposition and chaos.

One poster related an experience in which they witnessed two YouTube influencers working in a public place.

During their break, they offered assistance to a woman who was struggling to pull a baby carriage up some steps while everyone else ignored her.

Another story was told by a set of young parents who were taking cover from the storm below an awning when they were given an umbrella by a stranger who was passing by.

But there was one story in particular that GNN really enjoyed, and a big reason for it was the narrator.

“I was inspired by reading all of the great stories [on the message board], and as a result, I helped a couple of our neighbors this morning by giving them de-icer because their windscreens were frozen over, and they were running late.”

However, I must have gotten carried away because there was no de-icer left for my husband’s car, despite the fact that he had just gone out and purchased a fresh bottle.

Because of how much he cares about his neighbors, I have no doubt that I will be forgiven.