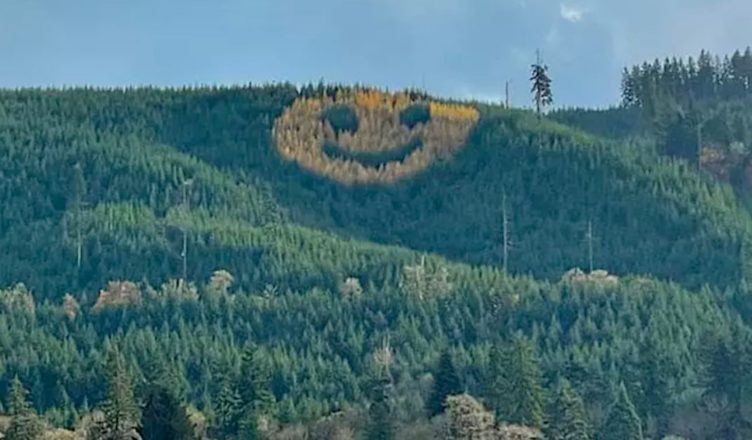 When fall arrives in Oregon and drivers take route 18, they are greeted by hills that appear to be “beaming” with a smile.

The Hampton Lumber firm cut down the trees on that hill many years ago and then opted to replace early-changing larch trees in the shape of a happy face. That is why you see them there now.

On the route in Polk County that runs between Grand Ronde and Willamina, it stands out like an emoji despite being surrounded by evergreen trees.

The fall season in the Pacific Northwest is absolutely breathtaking, and its beauty is enough to put a grin not just on your face but also on the hills themselves.

According to an interview with Oregon Live conducted by Kristin Rasmussen, a spokesman for Hampton, “After every harvest, our foresters start planning the process of replanting.”

They often plant a range of native species, such as Douglas fir, western hemlock, noble fir, and western red cedar, depending on the elevation and the characteristics of the soil.

Because larch is a conifer and has needles that turn yellow and fall off in the fall, the smiley face is most apparent during this time of year.

The business notes that it will be another 30 to 50 years before those trees can be harvested again, at which point they plan to try their hand at creating a different type of emoji.