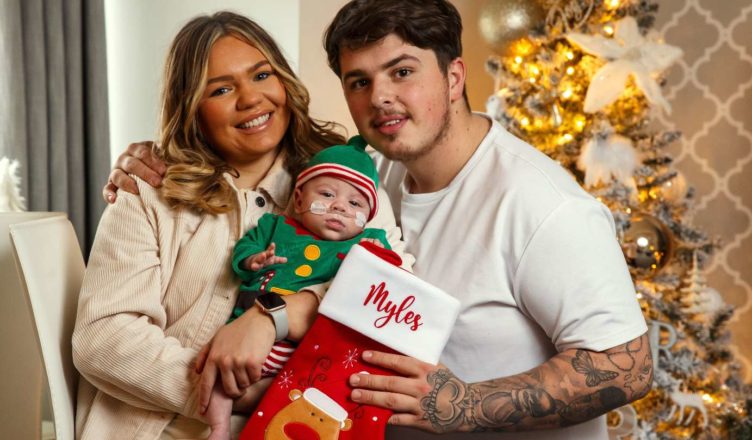 A miracle preterm baby born the size of an iPhone celebrated Christmas at home with his parents after a “rollercoaster” year in which they feared he would not live.

The kid was born so little that it was comparable to the size of an iPhone.

On June 19, little Myles was delivered 14 weeks before his due date, weighing only 1 pound and 8 ounces at birth.

After being diagnosed with pre-eclampsia at the 26th week of her pregnancy, 24-year-old mother Rebecca Grainger was brought to the hospital for an emergency Caesarian section.

Myles was unable to breathe on his own, therefore he was immediately placed on a ventilator. He fought for his life for fifteen weeks during this ordeal.

Before being transported to neonatal intensive care, Myles was only able to be seen by his father, Warren McKenna, and briefly held by him. Rebecca was unable to see or hold her son.

As a result of the limits imposed by Covid-19, only parents were permitted inside the newborn critical care unit, and Warren was the only one who was permitted to visit Rebecca.

Because losing ten days with their newborn would have been the “biggest nightmare” for the couple, they lived in constant fear of contracting covid or being forced to isolate themselves.

During the 15 weeks that Myles was hospitalized, the life of the couple were centered around the institution.

Rebecca, who lives in Yoker, Glasgow, shared her sentiments, saying, “Knowing that I couldn’t get up there for 10 days would have been my worst nightmare.”

Rebecca said that she had a healthy and uneventful pregnancy up until the 26th week, when she became concerned since she hadn’t felt much movement from her baby and made the decision to consult with her midwife.

She was under continual observation, but the baby’s heart rate fell rapidly, requiring the medical staff to take immediate action.

Rebecca admitted that she had the following thought: “I’m just being a drama queen, but I’ll simply phone and see.”

“When we arrived to the hospital, I had the impression that we would be there for no more than ten minutes.

“But after taking me into a private room, they basically told me that I wouldn’t be getting pregnant again in the future.

Although Myles was dependent on a ventilator for the first three weeks of his life, he was successful in overcoming a blood infection; yet, the condition of his lungs did not improve throughout this time.

The program, which is called vCreate and it is a secure video messaging app, was funded by the Glasgow Children’s Hospital Charity so that Myles’ parents could receive frequent updates from their baby’s physicians.

According to Rebecca, “Our daily routine consisted of getting up first thing and checking the vCreate, where the nurses would have transmitted a picture or video during the course of the night.” 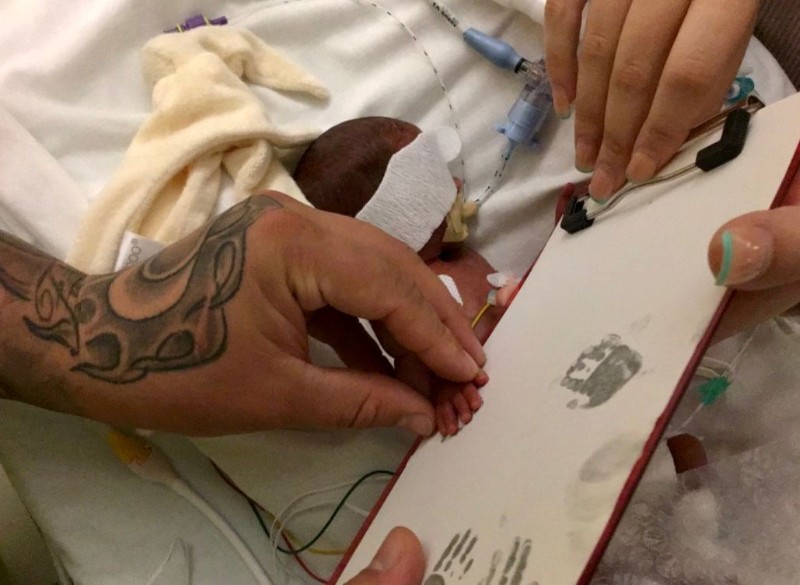 “They were quite personable, and that proved to be of great assistance to us.

“The doctor sat us down and told us that Myles had been on the ventilator for too long, and that in order to wean him off of it, they would give him steroids.

However, there were negative effects associated with both of these treatments.”

“I am sure that I questioned what the potential adverse effects would be.

“The specialist basically stated, ‘If he continues on the ventilator he could die, but if he is given steroids he could die,’ and I remember just thinking, ‘Why is this happening to us?’ in response to what she said.

It was constantly described to us as being similar to a rollercoaster, and when I got to this moment, I thought to myself, ‘The rollercoaster has come to a stop.’

“He was about the size of an iPhone, and he could actually fit on the palm of my hand.”

“According to the consultants’ explanations, there is a 50/50 chance that anything might occur with him.

“It was quite challenging for me to hear by myself, particularly because I was afraid of the unknown.

“By the time we were able to take him home, he weighed a total of 5 pounds and 5 ounces.

Although he is still quite small, we had the impression that he was a baby giant due to his enormous size.

Even though Myles suffers from chronic lung disease, his mother Rebecca was only able to hold him for the first time a week after he was born. However, she reports that he is adjusting well to life at home today.

Rebecca remarked that the first time she held him and was able to glimpse his little face was a fantastic experience.

“Having direct skin-to-skin contact occurred at a later time and was an entirely new sensation.

“At that moment, I had the distinct impression that I am his mother.

When he was finally able to meet his extended family, there was so much crying that it was uncontrollable. We are the recipients of a miraculous blessing.”