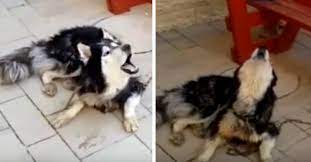 The owner of a lost dog claimed that the police could easily identify the canine by performing its favorite song once they located it.

At some point, while on patrol, police saw a dog fitting the description.

The starving puppy had been under the care of a group of youngsters who claimed to have discovered it in a field.

Police then contacted the owner to see if he wanted to come identify the dog.

The man stated it wasn’t necessary because the police could just play the opening theme from an Israeli sitcom called Shemesh or the tune from a children’s show called Arthur.

The husky looked up in clear familiarity when one of the officers started playing the theme from his phone, and immediately began howling along with the melody.

A tearful embrace ensued after the husky was reunited with his owner, who was overjoyed to see his fuzzy friend again.