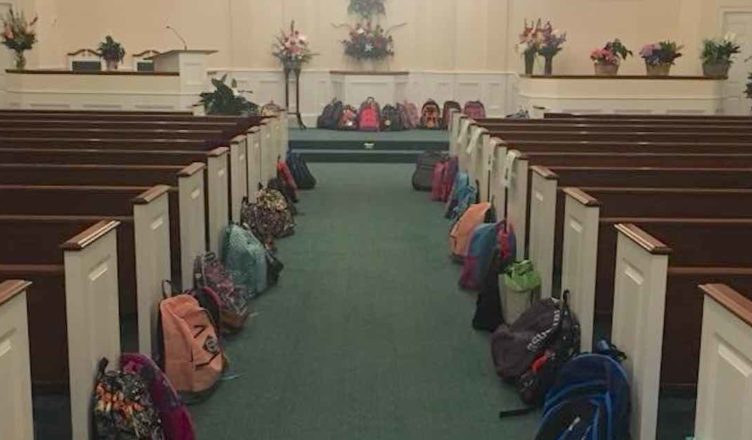 At the funeral of one woman, rather as flowers, there were backpacks lined up along the seats in accordance with the woman’s last wish.

Before she passed away earlier this month at the age of 58 from a protracted illness at Northside Hospital-Forsyth in Georgia, Tammy Waddell asked for people to bring backpacks filled with school supplies to her funeral.

Although she made this request shortly before she died, she was unable to fulfill it.

Waddell was employed in the Forsyth County school system both as a paraprofessional and as a teacher at a number of different schools.

During the course of her 30-year career, she was even awarded the title of Teacher of the Year at one time.

No one was shocked, therefore, when she used her funeral as a way to give back to her pupils one more time; it was a humanitarian act that everyone expected from her.

According to what is said in her obituary, “Those around her identified Tammy by her kindness, altruism, and unconditional love.”

“Even though she has a long list of accomplishments and accolades, none of them compare to the number of people whose lives she has improved during the course of her thirty-year career in education.”

Waddell’s cousin, Dr. Brad Johnson, shared a picture of the one-of-a-kind funeral feature on Twitter, where it received both compliments and expressions of sympathy from other users.

According to a tweet posted by Brad Johnson, “My cousin who was a teacher requested that in lieu of flowers, needy youngsters be given backpacks filled with school supplies at her burial.”

“Being of service to others to the very end.”

Project Connect is a program run by the school system that distributes free school supplies to the most disadvantaged pupils in the area.

The donated backpacks will be given to this program.