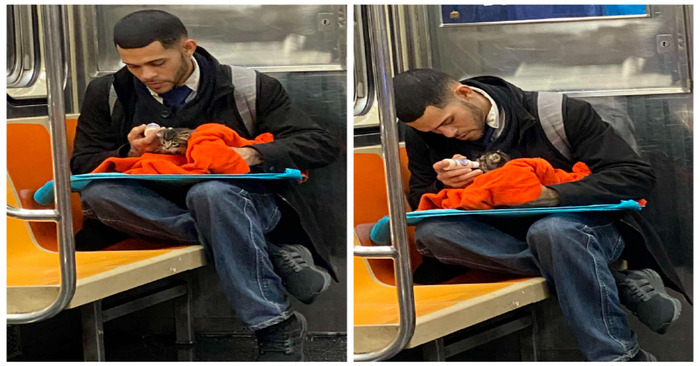 A man gave a young kitten milk from a bottle.

A ride on the train in New York City is guaranteed to be amusing. There is no way to know in advance what you will find when you go there.

An extraordinary event took place when Gillian Roberts was riding the subway. She saw all of it.

She made the decision to record this moment on camera so that she could look back on it in the future. It was done in a very delicate and emotional manner.

She looked around and saw a man sitting in the subway with a small kitten that was wrapped in a towel.

The video of a guy hand-feeding a little kitten in a subway station went viral, and the tale behind it did the same.

He was feeding the little cat out of a bottle, which was the cutest thing that could possibly have happened.

It’s so heartwarming to think that there are still people in our world that give a hoot about the welfare of these itty-bitty creatures.

Seeing a man take care of such a lovable small animal was truly a remarkable sight to behold. When she saw that, the woman’s heart completely melted.

It showed how kind a man can be toward other living creatures.

In addition to taking photographs of this gorgeous scene, she also decided to approach the individual in question and have a brief conversation with him.

He said that he found the cute kitten in a back alley and decided to take care of her alone.

He was committed to giving everything he could to the cause.

She had nothing but adoration for the kind-hearted man who rescued the helpless kitty.

The video of a guy hand-feeding a little kitten in a subway station went viral, and the tale behind it did the same.

He was the only person who genuinely cared about the well-being of the cat.

While he was giving it to her, the cat was paying close attention to what he was doing.

It is quite amazing to come across people with such generous spirits.

After witnessing them, you come to the conclusion that free-ranging animals contribute to improving the state of the planet.

This story brought a smile on the woman’s face!