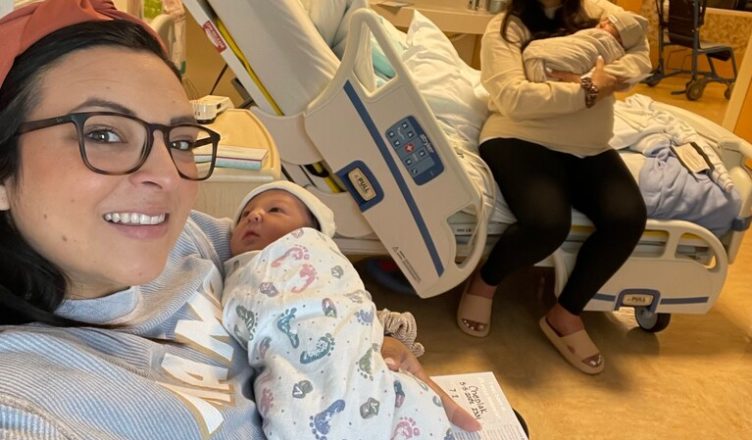 During their pregnancies, Erin Cheplak and Jill Justiniani, who are twins, joked that they would both give birth on the same day. They never really thought it would happen. Then, all of a sudden, it did.

Cheplak told her sister over the phone just before 9 a.m. on May 5, the day Justiniani was supposed to have her C-section. “My water broke.”

The twin sisters gave birth to their first sons just a few hours apart in the same hall at the Kaiser Permanente hospital in Anaheim, California.

The babies were born on the same day at the same hospital, and their sizes were also the same. Oliver, the son of Justiniani, and Silas, the son of Cheplak, both weighed 7 pounds and 3 ounces when they were born. Each one was 20 inches long.

Even though the sisters were shocked by how close together their sons were born, they said that in some ways it was normal. The 30-year-old twins have lived in Yorba Linda, California, about two miles apart from each other their whole lives.

Cheplak said, “We’ve always done everything together.” “It’s been great to be able to go through every step of life together. We really are the best of friends.”

As kids growing up in Brea, California, all of their hobbies and interests were the same, and when they became adults, they also went into the same line of work.

They both got their master’s degrees in occupational therapy from California State University, Dominguez Hills, where they also studied kinesiology.

Now, they work at an outpatient clinic with occupational therapists for children. Their desks are side-by-side. Often, they bring lunch to each other.

The sisters got married about a year apart and found out they were pregnant about eight days apart, which they said was not planned.

Justiniani and her husband Ian had been trying to get pregnant for almost a year when they finally got a positive result on the morning of Cheplak’s postponed wedding celebration in August 2021.

“We were following up and hoping and praying,” said Justiniani, who had lost a pregnancy a few months earlier. 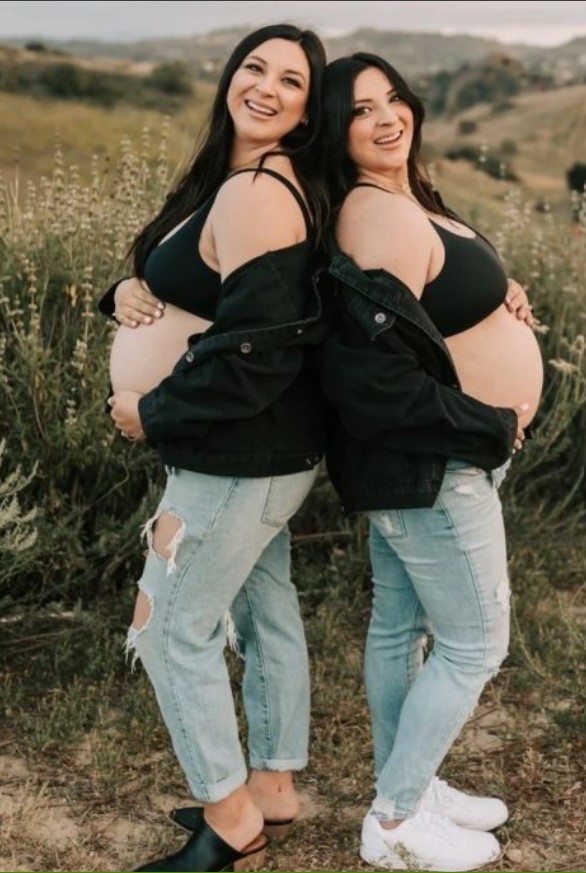 Ten days later, while on her honeymoon with her husband Zach in the Maldives, Cheplak noticed that her sense of smell was stronger than usual. This is sometimes a sign of an early pregnancy. She did a test at home, and the result was positive.

Justiniani said, “That was the first step toward feeling like this is pretty crazy, but also totally meant to happen.”

“We were both crying on the phone,” her sister said.

Cheplak said that even though the news was surprising, it felt right: “I just had a feeling that it was going to work out and that we were both going to be pregnant.”

Since their lives ran in sync, it made sense for them to go through the ups and downs of pregnancy together. It was also a lot of comfort for them.

“Since these were our first pregnancies, there was a lot we didn’t know,” Cheplak said.

The sisters think that their childhood is a big reason why they are so close, even though they share DNA. Allison, their younger sister, was born with Sialidosis, a rare and life-threatening genetic disorder. She died when the twins were 18 and she was 12.

Cheplak said, “We grew up in a family where our parents had to spend a lot of time with Allison.” “During those times, Jill and I really clung to each other.”

Justiniani said, “I really think we were meant to be together.” “We were able to make it through life’s hardest times together.”

“Every day, I feel like our younger sister is leading us in our work,” Justiniani said. “It made us into the people we are now.”

“We were hoping for the same gender, but we didn’t know for sure,” Justiniani said. “So when we both popped our balloons to find out the gender at the same time and saw a bunch of blue, we were both like, “Alright, here we go.”

Still, they didn’t expect to have babies on the same day. Even though they joked about it, they knew there wasn’t much chance of it happening. This was especially true when Justiniani found out her son was in the breech position and she would need a C-section.

She and Ian chose May 5, which was Cinco de Mayo and Ian’s dad’s favorite holiday. Justiniani said that ALS, or amyotrophic lateral sclerosis, was found to be the cause of his death in January.

The morning of May 5, more than a week before her due date on May 15, her sister’s water broke. This made the day even more important.

Cheplak ran to the hospital right away, and Justiniani got there soon after. In another lucky break, Justiniani’s surgery was put off for a few hours, so she and her husband could be in the room where Cheplak gave birth. They helped her feel better when her contractions were very painful and strong. 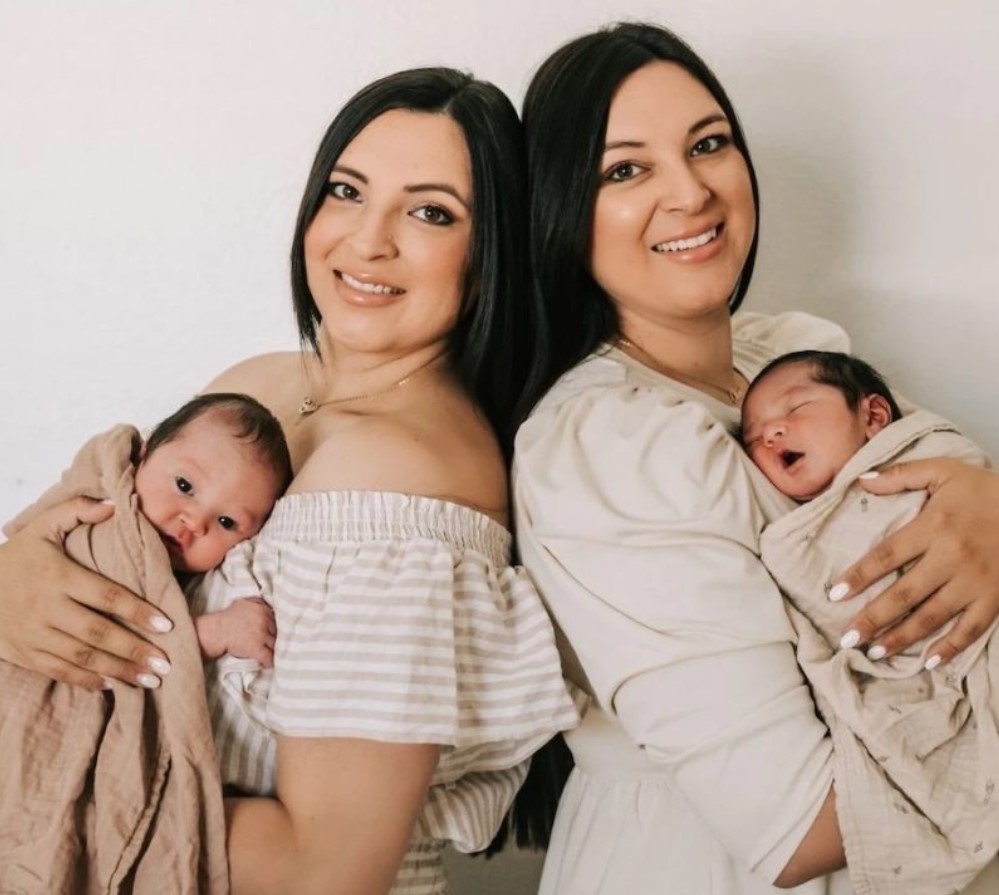 “Not only did my husband back me up, but my sister and Ian were there, too,” Cheplak said. “Like a movie,” he said.

The story about the sisters quickly spread through the hospital, making staff and patients happy. Alice Lau, a gynecologist and obstetrician at Kaiser Permanente who took care of both twins during their pregnancies, was shocked when the sisters both gave birth at the same time.

She said, “I really couldn’t believe it.” “I’ve never seen twins come into the world on the same day, and I don’t think I ever will.”

“It made my day, my week, and my year,” Lau said. “This is such great news, and it reminds us that miracles still happen.”

When Cheplak was about to get an epidural, Justiniani was rushed to the operating room for her C-section. Oliver, her son, was born at 6:39 in the evening.

As the night went on and Cheplak was still in labor, “the nurses were like, ‘Come on, baby, you’re on a deadline!'” Cheplak said. “It gave me the push I needed to keep going.”

Then, just in time, Silas showed up at 11:31. The whole hospital was filled with joy.

“It was amazing,” Justiniani said.

Even though they aren’t brothers, the boys already play together every day. Their mothers are sure that they will always be like twins.

Cheplak said, “We’re just so happy that they’re going to be able to go through all of life’s journeys together, just like we did.” “The pairing up goes on.”