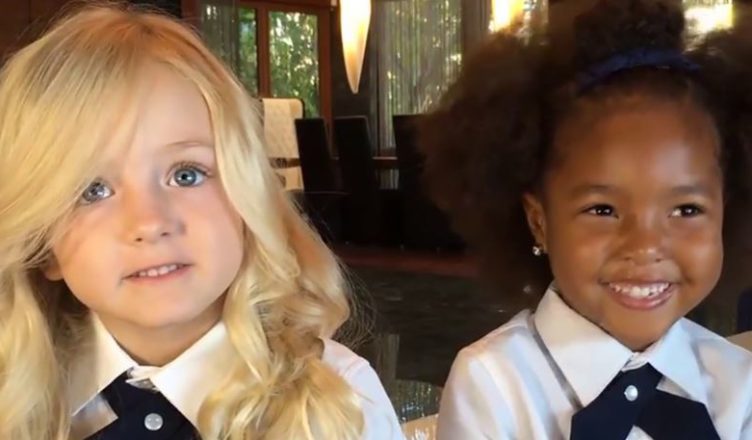 Jia Sarnicola and Zuri Copeland are both nine years old. They are very close, but if you ask them, they won’t say they’re best friends because they really think they’re twins.

According to Ashley Sarnicola, the mother of Jia Sarnicola said the girls first met when they were three years old at their school in Miami, which they both attended, and they immediately became best friends.

They were four years old when the media first caught up with these special souls, and they were clearly the best of friends. However, as they’ve gotten older, their connection has grown deeper, and now they swear they’re twins.

Ashley stated, “They will tell you that they are twins and they have a lengthy list of reasons why to back it up.”

Jia Sarnicola and Zuri Copeland believe they are twins.

The girls say that they share the same birthday.  They also talk about how they look alike. Jia says they are the same height, and they insist on wearing matching clothes.

The girls’ birthdays are on June 3 and 5, and they have had parties together over the years. Both of these cute people have traits in common.

Ashley said, “They have the same lively energy, intelligence, and desire to care for others. Both are also very clear about what they want.”

“We’ve always told the girls that being different is cool and that making new friends every day is important,” she said. “There are a total of six different languages being spoken by the 15 children in their class at school.”

In 2017, Jia Sarnicola and Zuri Copeland said they are not just best friends but twins. They were just 4-years-old at the time of this story by @SteveHartmanCBS. But their message could teach us "grown ups" a lot today. https://t.co/dz0oKtUJ8m

She said that Jia had informed her that she preferred chocolate to vanilla and wished she had Zuri’s skin color.

The mothers of the girls, who are now close friends as well, expressed concern about society dictating how they should feel about each other.

The girls were at a birthday celebration when an older child informed them they couldn’t be twins since they don’t have the same skin color.

The cruel comment made Jia cry, but she was able to come up with this killer line in spite of her tears. “You don’t know what you’re talking about”, she replied. “We’re twins because we share the same soul.'”

My sister and her bestfriend think that they’re twins because they have the same birthday and this was the outcome.. pic.twitter.com/x1dCZmIip3

Valencia, Zuri’s mom, says she hopes nothing will ever come between these two cuties.

Valencia was quoted as saying, “We have a lot to learn and we can learn from children.”