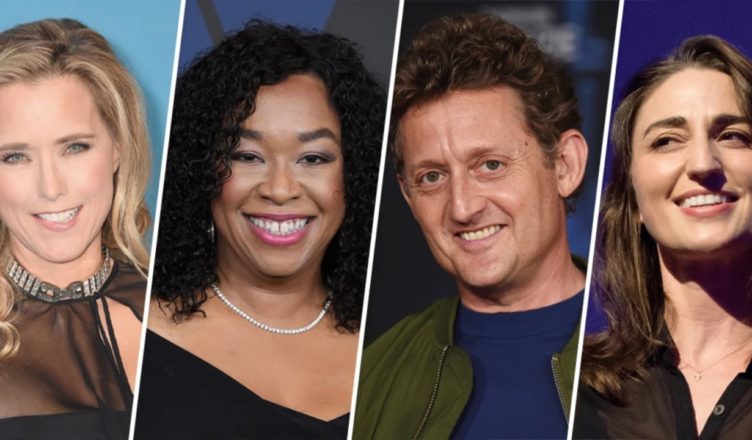 Shonda Rhimes, Téa Leoni, and others in the entertainment industry have stated that they are abandoning the platform following Elon Musk’s takeover.․

As a result of Elon Musk’s acquisition of Twitter, several in Hollywood are leaving the industry.

“Grey’s Anatomy” creator Shonda Rhimes and others in the entertainment business plan to leave the platform now that it is owned by Musk, a self-described “free speech absolutist” who has pledged to make broad changes, including possibly lifting the ban on former President Donald Trump.

“Not waiting around to see what Elon has in store. Bye,” Rhimes tweeted Saturday afternoon to her almost 2 million Twitter followers, two days after Musk concluded his $44 billion agreement to acquire the service.․․

Here is a list of additional people from the intertwined worlds of television, film, music, and sports who have announced their intention to quit.

Sunday, the Grammy-winning singer-songwriter tweeted to her nearly three million fans, “Welp. Twitter has been entertaining. I’m out. Folks, we’ll see you on the other platforms.

Bareilles concluded her post with heart and praying-hands emojis and the words, “Sorry, this one’s not for me.”

In a tweet addressed to over 2 million of her followers Friday, the Grammy-winning R&B singer condemned the content she claimed to have seen on Twitter since Musk’s acquisition, stating, “I am startled and outraged by some of the ‘free speech’ I’ve witnessed on this platform since its acquisition.

“Hate speech under the guise of ‘free expression’ is unacceptable; therefore, I have chosen to remain away from Twitter since it is no longer a safe platform for myself, my sons, and other POC,” Braxton said, using the acronym for people of color.

Mick Foley Foley, a retired professional wrestler and actor, wrote on his public, verified Facebook page that he is taking a “pause” from Twitter “since the new ownership — and the disinformation and hatred it appears to be encouraging — has my stomach in a knot.”

“I truly enjoy engaging with all of you on social media, but sometimes it may become overwhelming. Foley tweeted on Friday, “I expect to return in a few weeks, but in the meantime, I will continue to post on Facebook and Instagram.” “I hope that everyone will be courteous to one another.

“Please vote if you can, too,” he continued. “Our democracy appears to be dangling by a thread.” (It looks that Foley’s Twitter account has been disabled.)

Whoopi Goldberg Goldberg, the Oscar and Emmy-winning co-host of “The View,” said on Monday’s episode of the ABC talk show that she is “done with Twitter for now.”

“I’m leaving, and if things calm down and I feel more comfortable, I may return,” Goldberg stated on the show.

Monday afternoon, Goldberg’s account appeared to be disabled. The spokeswoman for Goldberg did not reply quickly to a request for comment. 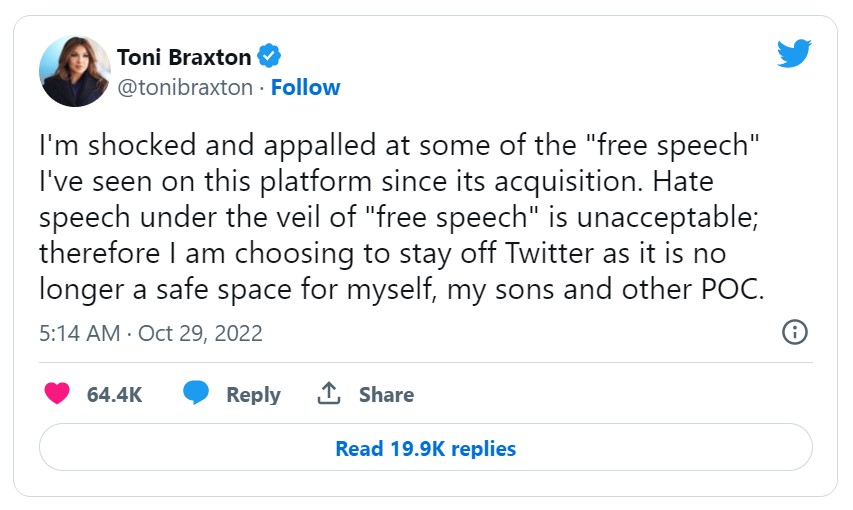 Hadid stated on Instagram, “I cannot guarantee it is a secure place for anyone, nor is it a social platform that will bring more good than damage.”

Co-creator of the Showtime dramas “Billions” and “Super Pumped: The Battle for Uber” Brian Koppelman Koppelman recently tweeted, “Y’all, for real, come find me on Instagram and the tok.

Going to attempt to take a break from this for a minute or a month at the conclusion of the transaction.”

Erik Larsen, widely known for his work on “The Amazing Spider-Man,” reportedly wrote in April, “The day Elon Musk purchases Twitter is the day I deactivate my account and leave Twitter.”

Larsen confirmed through email that he is leaving Twitter.

Racists, so-called “patriots,” and creeps are back in full force.”

“I have no regrets,” he added.

Téa Leoni Leoni, best known for her role in the CBS political thriller “Madam Secretary,” tweeted on Saturday to her approximately 124,000 followers:

“Today, the dust has shown too much hatred and the wrong course,” Leoni continued. “Love, benevolence, and opportunities for all of you.”

Bill Morrison, a comic book artist and illustrator who has contributed to “The Simpsons” media world, revealed in a LinkedIn message that he cancelled his Twitter account in response to Musk’s takeover.

Morrison stated, “I considered waiting to see if he reinstated Trump’s account, but felt there were many reasons to leave even without Trump’s return.”

Executive producer of NBC’s “This Is Us” and former star of ABC’s “Thirtysomething” Ken Olin Olin tweeted to his approximately 293,000 followers that he is “out of here.” He then pleaded for peace and kindness.

Marina Sirtis Sirtis, best known for her role as Deanna Troi in “Star Trek: The Next Generation,” canceled her account and left the platform following Musk’s takeover, her spokesperson confirmed via email.

Sirtis said in a statement, “If I needed confirmation that quitting Twitter was the right decision, Musk’s post about the attack on Paul Pelosi (which he later deleted) and the avalanche of hate I experienced when I announced my departure confirmed my decision.”

In a Friday tweet, the actor stated, “I’m sorry, but I cannot be associated with anything owned by #ELONMUSK and his cabal of deplorable.

I’ll stay for a few days so we can say our goodbyes, but then I’ll be gone.”

Alex Winter Winter, an actor and filmmaker best known for his role as Bill in the “Bill & Ted” film series opposite Keanu Reeves, deactivated his Twitter account after Musk’s acquisition.

His site bio now reads “Not here” and contains a link to his Instagram profile.

“By making Twitter a private firm with less regulation, Elon Musk has immediately rendered the site more susceptible to hate speech, targeted attacks, and the dissemination of misinformation,” Winter wrote in an email. Many of us will return if Twitter returns to being a public company managed by sane actors.