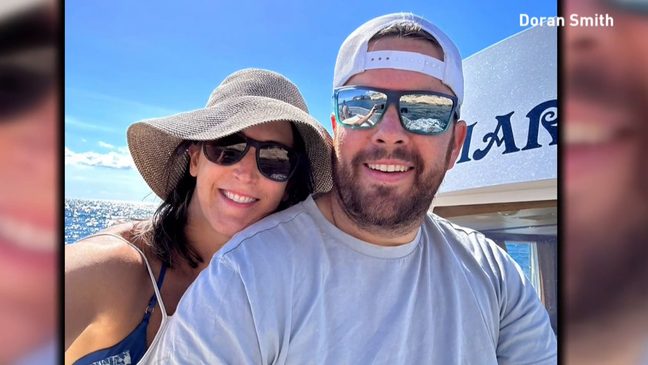 Imagine this: you and your spouse are on your honeymoon in Europe when you spot a burning building and decide to dash inside through the smoke.

You wind up in a room with 20 sleeping newborns and nurses who are in a panic. No one knows English.

Incredibly, David Squillante and Doran Smith, honeymooners from Rhode Island, found themselves in this scenario in Barcelona last month.

The 38-year-old newlyweds were on their way to visit a park when they noticed a group of women panicked at a doorway from which dense smoke was emanating.․․

Smith stated, “I observed a flame emanating from the doorway adjacent to the exit from which the women had just emerged.” Thus, I said, “Oh my God, there’s a fire!”

Who knows what possessed the non-Spanish-speaking newlyweds to sprint into the blazing building, as there was no outside indication of the valuable cargo within; they could have been running into an ordinary apartment building.․

In spite of the fact that neither Squillante nor Smith comprehended what was likely being told to them, they were soon able to communicate in a “universal language.”

They entered a non-burning room and found they were in a nursery, of all places.․,

“Instinct seized over,” stated Squillante. “I found myself staring at fifteen to twenty sleeping infants, and we immediately began to line them up and place them in their respective cribs.

It was probably about ten minutes, but it felt like an instant, but everything turned out well.”

After ensuring everyone’s safety, the couple continued their honeymoon. According to an NBC affiliate, they continued on with their planned park trip.․․

According to People Magazine, Squillante is researching the possibility of becoming a volunteer fireman in their hometown of Bristol.