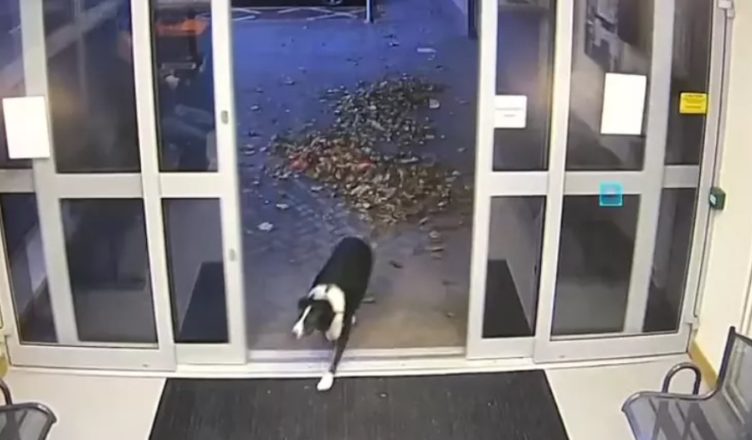 A lost 10-year-old dog named Rosie walked into a local police station and is now safe and with her owners.

Rosie walks into an English police station in Leicestershire and sits down in the waiting room, as seen on surveillance video from the station.

The police department posted the cute video of Rosie’s arrival on its Facebook page on Monday.

In the caption, Leicestershire Police wrote, “Our staff went to get Rosie some water and made fast friends with a lot of fuss.”

“Rosie was wearing a collar, so it was easy to get in touch with her owner, who was happy to hear that she had been found safe and sound.”

According to BBC, Rosie, a border collie, went missing while walking in Southfields Park with her dog dad, Steve, 68, and the family’s other dog, Laser. Someone set off fireworks nearby, and she ran away.

Steve’s wife, Julie, 61, told the outlet that Rosie “went and stood with her dad, which is what she does when she is nervous, and then ran away [when the fireworks went off].”

Rosie was lucky because she knew where to go to get help.

Even though Julie said that Steve was “really upset” that Rosie had run away, he was glad to hear that the dog was safe when he and Julie got a call.

Julie said, “I was so happy and relieved that she was safe, and I was so proud of her for being smart enough to find her way to the police station.”

Julie remembered getting the call from the police station and, according to The Independent, told the PA news agency, ”

“Do you have a black-and-white collie?” they asked. I said, ‘Yes,’ and then they said, ‘She just walked up and handed herself into the station.’ ”

Julie said that Rosie “loves to exercise” and do “collie things.” However, she’s not a fan of fireworks.

“Someone let off a firework, and Rosie does not like loud bangs,” said Julie, adding that Rosie “hates bonfire night” and will just “go and hide in the bath and shake.”

She and Steve got Rosie from a place called K9 Focus eight years ago.