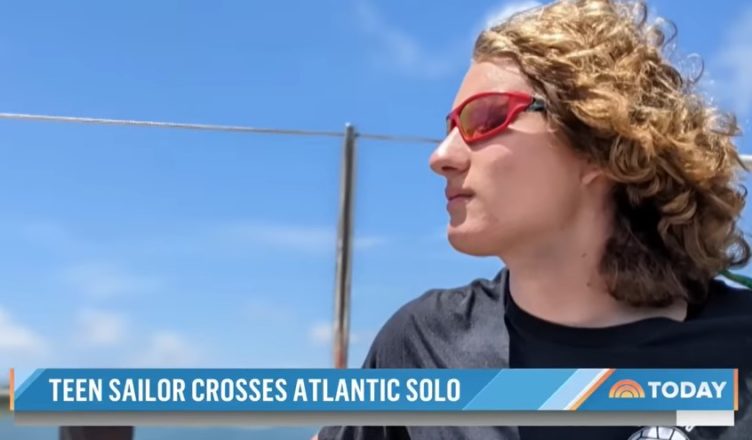 A teenager from California has sailed alone across the Atlantic Ocean. He did this before his junior year of high school.

Today says that 16-year-old Cal Currier spent 28 days sailing from Marion, Massachusetts, to Lagos, Portugal, which is almost 4,000 miles away. He did this on a 30-foot sailboat.

As if that wasn’t impressive enough, The Boston Globe said that the teen only started sailing lessons in January, just a few months before he set sail on June 27.

He told the newspaper, “I started sailing with this goal in mind: I want to sail alone across the Atlantic.”

Cal finished his mission on The Argo, a Tartan monohull sailboat that was built in 1976 and that he bought from the well-known sailmaker Sandy Van Zandt.

According to the Globe, the teen bought the boat with $12,000 he earned from a summer camp he started with his three brothers and from sponsorships.

Van Zandt said that Cal quickly learned how to sail. He told the newspaper, “He was so good at it.” “I had no idea he was just starting to learn how to sail.”

Cal came up with the idea for the solo trip when he was thinking of ways to spend the summer. “It was Thanksgiving break, and I told ABC affiliate WCVB, ‘I don’t know what I want to do this summer.’

“I’m getting older. I don’t want to just sit around and do nothing.”

The teen’s father, who sails across the Atlantic Ocean, liked the idea right away. His mom, on the other hand, “took a little more persuading.”

WCVB said that once Cal was on his trip, he could only connect with his family through satellite every so often. James, Cal’s dad, said that his family was probably checking his son’s tracker 20 times a day.

But being alone gave the soon-to-be junior in high school a chance to start reading.

He told the news source, “This was just a great chance for me to read.” “Get back to reading, and get back to just sitting and thinking about what life is all about.

Even though I didn’t answer any, I did read some Plato.”

Cal said that the trip wasn’t “all that hard” physically, but that it was hard on his mind.

“The mental part is definitely the hardest,” he told Today. He said that being alone, being bored, and not getting enough sleep were “the biggest problems I had to deal with.”

Cal told the news outlet that the most important thing he learned from the trip was “how important people are to me.”

So, Cal will enjoy his hobby with other people for the time being. He said, “I don’t think I’ll go on any more big solo trips.” “Being with people is just more fun.”