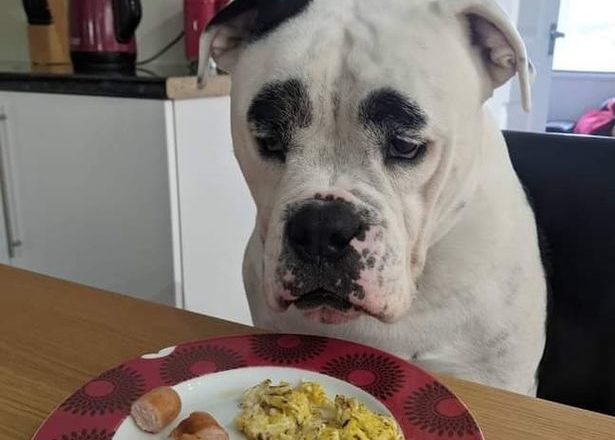 A dog who is treated well has his own seat at the table and gets Sunday roasts and breakfasts with a fork. Since he was a puppy, Dennis, a four-year-old bulldog, has been eating “like a human.”

He pulls out his own chair and waits patiently for his owners to finish their meal so he can have his own tea.

The owners, Sam Grant, 52, and Craig Grant, 54, enjoy having Dennis join them for meals and say “it’s like having a baby” again.

The spoiled and well-behaved puppy is very careful with the family’s silverware, and mum-of-two Sam can even wipe off any drool between bites.

Dennis eats breakfast with his family every morning, which is toast with butter. For dinner, he eats salmon, scrambled eggs, and sausages.

Sam from Bowerhill, Wiltshire, said, “He’s always sat at the table. He started when he was a puppy, and we didn’t mind. He has a seat of his own that he pulls out before sitting down.

“He eats with us once or twice a day if we’re all sitting down at the same time. We don’t feed him until we’re done. He sits down and waits. He looks at the food, but he would never eat it. 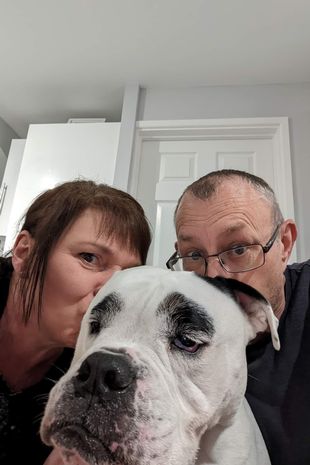 “We finish eating, and then we feed him with a fork. It’s the same as having a child.

“He’s very patient. While he’s waiting, he’ll lick his lips and rest his head on the table, making himself look sleepy.

“He is eating from his own plate. He’s a bulldog, so he’s a bit slobbery, so if we fed him in the middle, he’d start to dribble.

“He waits until the last minute, and then we have to put down kitchen roll.

“He has toast and butter every single morning. He likes fish, especially salmon. He likes everything we like, so if we have a roast dinner, he’ll have one too.

“When we have breakfast together, he eats scrambled eggs and a sausage. He has everything we do.

“He’s like a human. I love it because it helps us get closer and I like wiping his chops.

“He is really good at and gentle with taking the food off the fork. Of course, I wouldn’t take him to the Ritz. 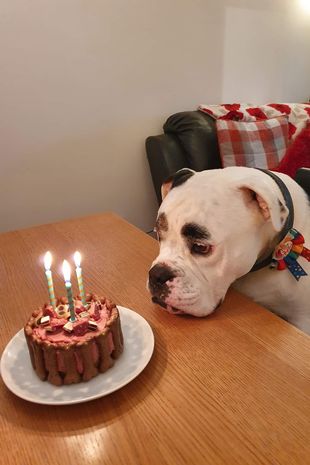 “He doesn’t have his own dishes or silverware, but I have some forks that are a little bit older that I use for Dennis. We just washed them in a very hot dishwasher.

“He gets spoiled a lot, but he’s good. We wouldn’t let him steal food if he tried.”

The mother of two says she feeds Dennis like a baby because, after Leah, 30, and Jordan, 28, moved out, he became like a son to her and her husband.

Sam said, “All the other kids have left, so he’s our son now.

“Some people find it disgusting. We don’t have many guests, but when we did, my son’s slobber used to bother people, but now everyone is used to it and just expects him to be there.

Sam sleeps in the spare room every night so her spoiled pet can curl up next to Craig, who works in a factory. Once a week, Sam takes him to doggy day care so he can play with other dogs.

Sam said, “Craig loves him, and he is definitely my husband’s dog. Every night, he’s always slept with Craig. 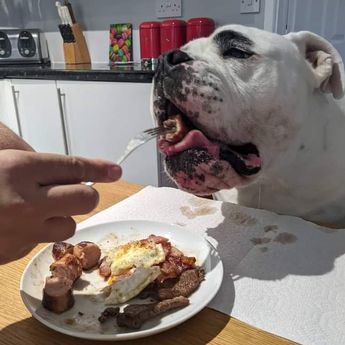 “We don’t sleep with each other so that the dog can sleep with him. It’s beautiful.

“He’s like a bulldozer. He loves people, but he knocks them all over. He’s good inside the house.

“When we’re out, he wants to jump on people, but he’s five stone, so I have to be careful.

“Every Wednesday, he goes to dog day care to see his friends. They have a garden with a playground and a room-like area with sofas.

“They have parties. He’s been to one for Jubilee and one for Halloween. He enjoys it.

He doesn’t have to go because he goes out every day, but we want him to get along with other dogs because he lives alone. He is eager to leave.”