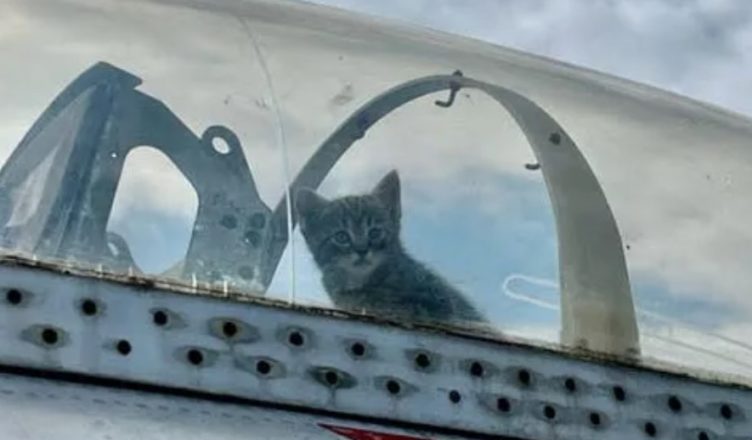 The Hickory Aviation Museum had a bunch of unexpected visitors not long ago.

According to the Charlotte Observer, an employee at a North Carolina museum looked into some strange noises coming from one of the museum’s planes and found a cat and her five kittens making the sounds.

“Not only do we have to deal with rain, wind, heat, wasps, and birds, but one of the cats that roams the airport near the terminal decided to have kittens in the T-33 Shooting Star,” the museum wrote on Facebook.

“If you are looking for a kitten, stop by the museum during open hours and ask. This is why we need to build a museum so we can bring our planes inside!!!”

After finding the cats, the museum found out that the cat had given birth to the kittens inside its historic Lockheed T-33 Shooting Star and kept them in the plane until they were big enough to be seen through the cockpit.

The Observer says that the cats were not kicked out of the Hickory Aviation Museum.

Instead, the place worked to find a rescue that could give the animals a new home. When the kittens are about eight weeks old, all of the cats from the Shooting Star plane will be up for adoption.

The Catawba County Humane Society helped the Hickory Aviation Museum get the cats out of the building safely.

Instead of trying to catch the cats by hand and possibly scaring them away to the Hickory Regional Airport, which is close to the museum, the rescue set up humane traps around the museum.

Visitors to the museum couldn’t go into the plane until the cats were saved.

The last cat who lived at the Hickory Aviation Museum was caught on October 31 by the Humane Society of Catawba County.

The cats are now in the care of the shelter. There, they will get their shots and get ready to be adopted in December.

Phantom, the mother cat, took the most time to find because she kept getting out of the traps.

Erin Hooks, the director of development for the humane society, told McClatchy News, “She steps over the plate, gets the food, and jumps out before the trap goes off.”

Cats have been seen around aviation before, so this isn’t the first time. After Hurricane Ian hit earlier this month, Greater Good Charities used its Good Flights program to fly 54 cats and 36 dogs to safety.

The flight took 90 pets out of shelters in Naples, Fort Meyers, and other parts of Florida that were hit hard by Hurricane Ian.

In a statement to PEOPLE, Liz Baker, CEO of Greater Good Charities, said, “This emergency flight of shelter pets from Florida is one of many things we’re doing to help people and pets affected by Hurricane Ian.”

“We are making plans for possible future transports and working hard with partners in affected and nearby areas to send pet food, supplies, and humanitarian aid to help people and pets recover from this terrible disaster.”