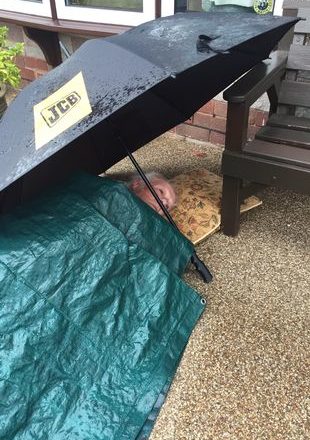 Despite living across the street from a large hospital, an 85-year-old patient was forced to sleep outside in the rain for seven hours with a broken hip.

Keith Royles, of Bodelwyddan, in north-east Wales, was out cutting his grass when he shattered his hip.

His family could never have predicted the devastation that would ensue.

Keith was left outside in the rain for seven hours instead of being hurried to the hospital to have his broken hip fixed.

His family tried to keep him warm as best they could, but he was in excruciating discomfort the entire time.

Despite the fact that the Ysbyty Glan Clwyd Hospital was directly across the street from where he lived.

Tina, Keith’s daughter, stated, “We contacted an ambulance and were told there would be a four to seven hour wait for an ambulance.”

“We called many times, and my sister even tried to hail an ambulance, but they stated they couldn’t assist.”

When paramedics came after an agonizing wait, Keith was informed that he would not be sent to the nearest hospital, but rather to one 30 miles away.

This was owing to enormous pressures on the local hospital, which made it ‘extremely busy.’

Tina stated that her family pleaded that her father, who has terminal cancer, should be moved to the hospital across the street, and he was ultimately.

“As a family, we’re not faulting the personnel,” she stated on S4C’s Y Byd ar Bedwar. “But the system is flawed.”

“I feel sad for the folks who have joined the military because it must be really irritating and heartbreaking to be in that situation.”

“They must be fleeing in droves.”

“We are extremely sorry about Mr Royles’ experience, which was no doubt a painful and worrisome wait for all involved,” said Lee Brooks, Executive Director of Operations at the Welsh Ambulance Service.

“We provide patients with an estimated time of arrival to be transparent and to empower callers to fully weigh their alternatives, and we do not deny that waiting up to seven hours for treatment is unacceptable.”

“Our emergency ambulance service exists to provide life-saving interventions and transport patients to hospitals as quickly as possible, so it’s disappointing when we can’t do so due to situations beyond our control.”

“The single biggest reason we can’t get to some patients promptly is hospital handover delays.”

“Despite record recruitment, including the establishment of 400 additional positions in our Emergency Medical Service in the last three years, it is insufficient to compensate for this lost capability.”

“It will take a system-wide effort to fix a system-wide issue, and we will continue to do our part in relieving strain by treating more patients over the phone and at home and sending them to more appropriate sectors of the NHS, avoiding the need for a journey to the Emergency Department.”

“New rosters will ensure that our limited resources are better aligned with demand, and we are working hard to have up to 100 more frontline personnel operational by late January.”

“If the Royles family wishes to discuss their experience, we invite them to contact us directly.”

“All we ask of the public is that they contact 999 in a serious or life-threatening emergency, so that we can protect our valuable resources for those who need us the most.”