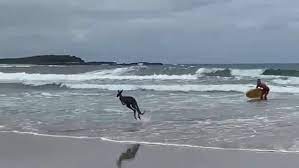 A rookie lifeguard rescued a kangaroo after it fell into the ocean off the coast of Australia.

Onlookers in Bundjalung National Park who were enjoying the surf and beauty on a rock shelf overhanging the ocean were astonished to see an eastern grey kangaroo hopping through rock pools and plunging into rough surf.

“My other workmate, Carissa, and I were sitting on the tractor when she says, ‘Oh my God, there’s a kangaroo jumping from the rocks!'” said Lillian Bee-Young, 17, a rookie lifeguard with a surfboard nearby.

“We were just figuring out what we should do… because that has never happened before.”

On that day, the north coast of New South Wales had rough seas. Lillian assumed the kangaroo was attempting to dodge some fishermen when it was “wiped out by a set (of waves).”

Lillian told ABC News Australia that as she paddled out with the rescue board, she wasn’t sure what to do.

She wasn’t sure if she should try to get it onto the board, or if doing so would put her in danger and stress the marsupial out even more.

It was barely keeping its head above water, but it didn’t want to come ashore because of the approaching crowd.

Her companion Carissa opened an avenue for Roo to feel safe, and after a few stumbles, it managed it back onto dry land before disappearing into the bushes.

“It was extremely unique. People were cheering and clapping… And then [the kangaroo] was just sitting there in the woods, almost like a thank you… “It was so peaceful,” Lillian added.