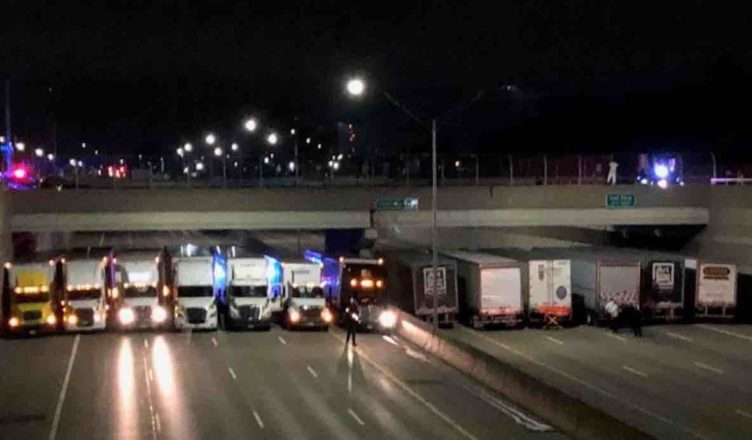 13 truck drivers have been commended for their amazing cooperation after using their massive vehicles to prevent a suicidal man from jumping off a bridge.

The Michigan State Police Department received a call concerning the man about 1 a.m. on Tuesday. In Oak Park, he was seen threatening to leap off a bridge over Interstate 696.

As authorities closed all highway lanes, they came up with the notion of coordinating with surrounding truck drivers so they could direct their semis under the bridge and avoid a potentially fatal injury.

Chris Harrison, who claims to be the driver of the yellow truck closest to the left of the line, told the event in a truckers’ Facebook page.

“The cops came along and waved 6 or 7 of us through before stopping us under the bridge,” Harrison reported. “It’s the same on the westbound side.”

After several hours of talks with state police and mediators, the man agreed to come down from the ledge and be brought to Beaumont hospital for evaluation. The drivers were then thanked by officials.

“The highway patrolman came to each truck and shook our hands and said thanks for helping,” Harrison says.

For its extraordinary display of teamwork, the inspiring story has already been shared by thousands of social media users and news sites.