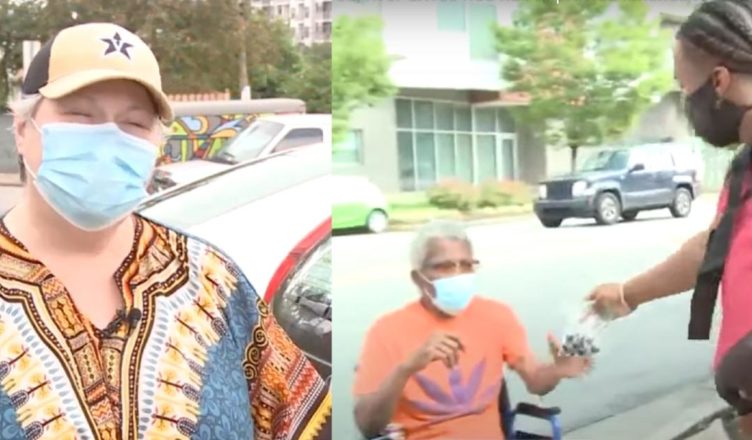 Kerry Wiles not only works as a scientist full-time, but she also works as a ride-share driver on weekends, donating her fares and earnings to Tennessee’s homeless community.

Kerry started working as a driver for Lyft and Uber after being diagnosed with breast cancer in 2018. She enjoys meeting new people and thought the work would be a fantastic chance to learn about their lives.

Along the way, she started donating her ride-share earnings to the city’s vast and expanding homeless population.

On Saturdays and Sundays, when she drives people about the city, she is able to deliver homemade PB&Js to approximately 100 homeless people.

This is no longer a one-woman sandwich delivery service. Kerry, who works Monday through Friday as a scientist at Vanderbilt University Medical Center’s Cooperative Human Tissue Network, provided a ride to a 24-year-old local named Ryan Caldwell early in her side career as a driver.

“He just has a wonderful ‘aura,'” Kerry tells GNN, without sounding too ‘quirky.’ “When you meet him, his compassion and charisma put you at rest right away.”

I knew he was earnest when he claimed he wanted to assist me serve lunches.”

Caldwell had the same reaction. “She’s been my best friend since the beginning,” he said to News Channel 5.

The lovely couple is now out delivering turkey rolls together.

“If someone wants a young man to be a role model, he is it,” Kerry says.
“The world urgently requires more ‘Ryans!'”

The two-person team is now compiling a list of shoe sizes for the local homeless community in order to provide them with winter boots.

Visit Nashville Homeless Helpers to read more about the initiatives the kind couple has undertaken.

This isn’t the first time Kerry has gone above and beyond to assist others. Back in 2017, we wrote about her’secret society’ project to support disadvantaged children.

Helping others comes naturally to Kerry. “Small steps in a greater challenge can make a beautiful imprint on your heart and spirit,” she explains.