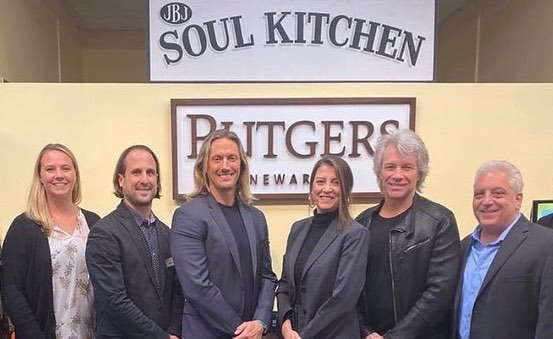 One of our favorite good news celebs, whose charitable acts have been covered on GNN nine times in the last decade and a half, has opened his heart—and wallet—once more.

Bon Jovi, a New Jersey rock musician best known for his stadium anthems “Living on a Prayer” and “Wanted Dead or Alive,” makes the most happy commotion in the restaurants he has founded to feed the hungry and homeless.

Anyone who visits his JBJ Soul Kitchen is always invited to feast on fresh, lovingly cooked meals, even if they have no money—in exchange for dedicating volunteer hours.

The 57-year-old rocker, along with his wife Dorothea Hurley, inaugurated his third Soul Kitchen restaurant in New Jersey this week.

On the Rutgers University campus, it caters to a new group of hungry low-income customers: college students.

Jon ridiculed the notion that eating nothing but quick noodles should be a rite of passage for kids who work hard.

The purpose of the Rutgers facility, according to Bon Jovi, is “to play a role in relieving food insecurity among college students and give them the support they need to fulfill their aspirations.”

The menu includes locally produced ingredients and many payment options, including pay what you can, pay what you want, volunteer, or pay it forward, a framework designed to foster a sense of community, respect, and dignity, as well as charity, among local populations.

JBJ Soul Kitchens in Toms River, New Jersey and Red Bank, New Jersey are also sites. According to the website, more than 105,000 meals have been served, with 46% of customers paying by giving their time and the remaining 54% through donations.

Bon Jovi stated during his most recent grand opening that he has no plans to cease expanding his culinary service any time soon.

Visit his website, JBJsoulkitchen.org, to purchase his spices, get directions and store hours, and donate and volunteer. Alternatively, you can follow his JBJ Soul Kitchen Instagram.