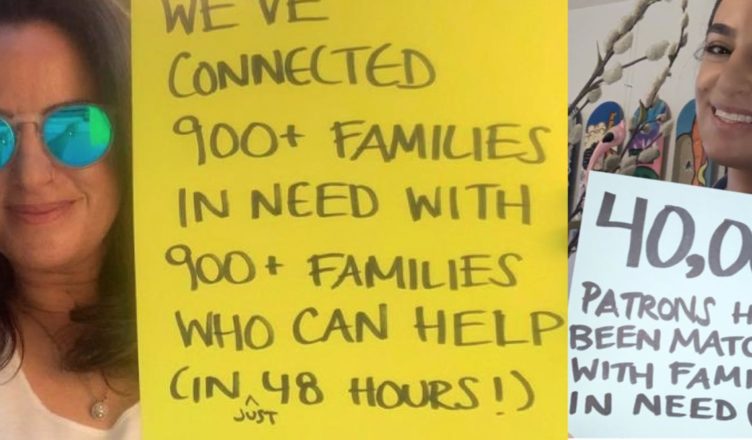 We rarely hear about the numerous modest, compassionate reactions that occur during times of distress.

A woman quietly began an internet grassroots campaign in South Florida with the intention of making a small influence in her community. It has now raised millions of dollars for hundreds of thousands of people worldwide.

After seeing individuals around her lose their employment, local mindfulness teacher Shelly Tygielski created her Pandemic of Love in Fort Lauderdale.

Concerned not only about money, but also about their health in the middle of the COVID-19 crisis, her social media feeds became rife with worry and anxiety—and Shelly saw an opportunity in the hardship.

“I wanted to convert this fearful situation into an opportunity for us to develop connection, community, and strengthen our love relationships,” Shelly told CNN.

It all started with a simple video uploaded on Shelly’s Instagram on March 14. She introduced a new program aimed at linking those in need due to income loss with those in a position of privilege and able to serve.

She wasn’t sure how much good her efforts would do when she went to bed that night. She had received 400 requests for aid and 500 offers of support by the morning.

“I honestly simply believed this would be a communal event for the South Florida community, for the people that come to our meditation group on Sundays, and that would’ve been enough,” Shelly explained to WTVJ News.

Shelly’s compassion prompted people all around the world to start similar internet exchanges in their own areas under her Love Pandemic banner.

People have used the Pandemic of Love website to offer assistance in 16 countries so far, including Mexico, Iceland, Chile, and Australia, in addition to the many groups that have sprung up around the United States.

According to Shelly, the majority of families seeking assistance want to stock up on food and supplies for their children, and the average request is around $150.

However, while COVID-19 has created a significant and obvious need, Shelly believes that the Pandemic of Love project will continue to flourish even after the coronavirus is eradicated.

Shelly stated of the effort, “On a personal level, it shows me that a person can make a difference when you aggregate this act of compassion.”

Although viruses might be frightening, the term “viral” does not have to be negative. Hope, faith, and love are all examples of wonderful things that can go viral. And love has the power to heal.”

As of June 4, the platform had raised over $13 million and linked 132,000 people with the assistance they require.

Visit the Pandemic of Love website to learn more if you or someone you know is in need of assistance, or if you are in a position to give and would like to do so. A webpage in Spanish is also available.