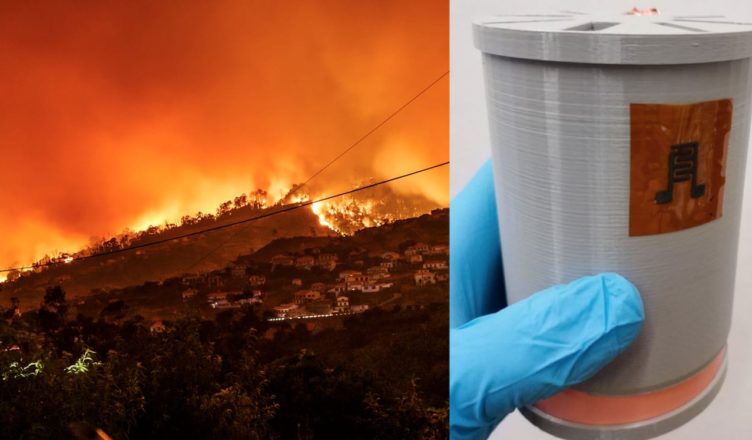 Smokey the Bear is fond of reminding people that they are the only ones who can put out forest fires, but what if Smokey had some technological assistance?

An innovative remote forest fire detector and warning system has been developed by a group of researchers from Michigan State University. The device is driven solely by the movement of the trees in the wind.

The battery-free device generates electrical power by harvesting energy from the random movement of the tree branches from which it hangs, as detailed in their recent study that was published in the journal Advanced Functional Materials.

This movement of the tree branches causes the device to generate power.

It would likely be much cheaper than manned patrols searching from fire watch towers, and it would be more reliable than satellite monitoring, which may be hindered by weather or fire smoke.

“The self-powered sensing system could continuously monitor the fire and environmental conditions without requiring maintenance after deployment,” said Changyong Cao, the lead author of the study and a mechanical engineer at MSU who directs the Laboratory of Soft Machines and Electronics.

Cao is also the professor in charge of the Laboratory of Soft Machines and Electronics.

The devastating forest fires that have occurred in recent years across the American West, Brazil, and Australia served as a driving motivation for Cao and his colleagues as they developed this innovative technique.

Cao is of the opinion that a prompt and prompt response to forest fires will make the process of putting them out easier, so greatly lowering the amount of damage done to property and the number of lives lost.

Battery technology is the primary source of power for the current crop of remote sensor technologies, despite their growing prevalence in the market.

Yaokun Pang, a co-author of the study and a postdoctoral associate in Cao’s group, stated that “while solar cells have been widely employed for portable electronics or self-powered systems, it is tough to put these in a forest because of the shadowing or covering of luxuriant vegetation.”

The TENG technology, which stands for “multilayered cylindrical triboelectric nanogenerator,” is able to transform external mechanical energy into electricity. One example of this would be the movement of a tree limb.

The TENG gadget can be simplified to its most basic form by seeing it as two cylindrical sleeves made of a single type of material that can be nested within one another.

The core sleeve is fixed in place from above, whilst the bottom sleeve is unrestricted in its ability to move laterally and vertically and is only held in place by a band or spring that is either elastic or connective.

The periodic loss of contact between the two sleeves, which occurs as they move out of sync with one another, produces electricity.

The MC-TENG makes use of a micro supercapacitor that is built on carbon nanotubes to store the electrical current that it occasionally generates.

The researchers chose this technology because of its quick charging and discharging durations, which enable the device to be adequately charged with only brief but steady gusts of wind.

According to Cao, “at a very low vibration frequency, the MC-TENG is capable of efficiently generating electricity to charge the connected supercapacitor in less than three minutes.”

The researchers equipped the first prototype with carbon monoxide (CO) sensors as well as temperature sensors.

The inclusion of a temperature sensor was done with the intention of lowering the probability of getting an erroneous “positive” result for carbon dioxide.

Cao and the other co-authors of the paper want to conduct field testing of a production device to monitor environmental variables in the forest and test different scenarios.

The device will use materials that are designed to simulate a real forest fire. In addition to this, the team wants to add extra capabilities to the device so that it may be customized to the specific climatic and ecological circumstances of the location where it will be used.