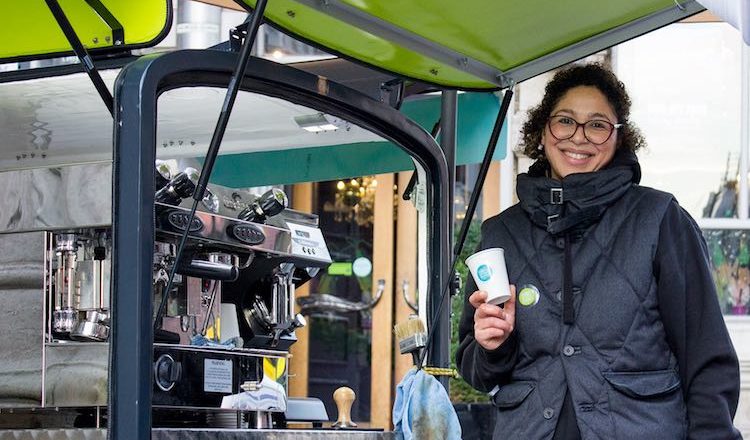 People in London are donating money from their morning coffee purchases to a program that helps homeless people find jobs.

While “Change Please” is busy brewing up a better future for homeless people by teaching them how to be baristas, they sell hot coffee out of mobile carts located all around the city.

Cemal Ezel, who manages the Old Spike Roastery, collaborated with The Big Issue magazine, which already gives homeless people the opportunity to make money by selling magazines on the street.

Together, Ezel’s knowledge in the coffee industry and this working network of homeless people boost the capabilities of the cutting-edge business venture in the same way that cream and sugar improve a cup of coffee in the morning.

The dark green carts are appearing at eight different sites throughout London, and they are selling coffee that is “ethically sourced” for approximately $3.50 a cup.

Change Baristas at Please earn the city’s living wage, which is approximately $13.00 per hour, while simultaneously acquiring skills that can help them get permanent positions in the food and beverage business.

Since starting work as a barista at Change Please in December, Jatinder Budwal has been able to use his income to get himself off of the streets and into an apartment.

He tells The Big Issue, “I saved up my income and I was lucky enough to find a little place to rent.”

“I saved up my wages and I was lucky enough to find a little room to rent.”

This non-profit organization has adopted the catchphrase “Baristas Wanted, No Home Needed” as its motto.