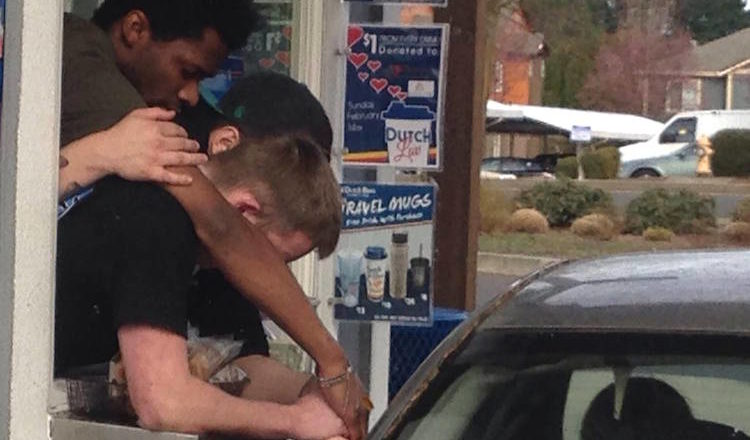 A group of staff members at a coffee shop in Vancouver, Washington, stopped what they were doing to console a grieving widow, while another customer took a stunning photograph of the touching scene.

While the young woman was placing her order from her vehicle, a worker at Dutch Bros. noted that she was in an upset state.

Her spouse, who was 37 years old, had just recently gone away the night before. When the cashier at the drive-thru offered to pray with her, other employees at the business wanted to hold her outstretched hand as they prayed as well.

The photograph that was taken on March 19 was taken by Barbara Danner, who was riding in the vehicle that was following, and she later uploaded it to the Facebook page for Dutch Bros.

Dutch Bros., which started in Oregon but now has dozens of locations stretching all the way to Arizona, has been confirmed by the comments section of this page as providing an exceptional level of customer service to a significant number of other customers.

“When my parents were in a head on collision last year, the amazing kids at the Dutch Bros on Coburg Road in Eugene came together with their own tips to purchase my mom (a very regular customer) a beautiful card,” wrote Brenda King Eien.

“When my parents were in a head on collision last year, the amazing kids at the Dutch Bros on Coburg Road in Eugene.”

They put money on a gift card for her so that she wouldn’t have to worry about paying for her coffee while she was recuperating for a long period.

When Sherrie Chapman Vieira stopped by after having to euthanize a much-loved pet, she said that she received the same excellent care as before.

“When I think of comfort, I think of a Dutch Bros. coffee. They did not charge me for it and accompanied it with some encouraging words. I’ve never forgotten that.”