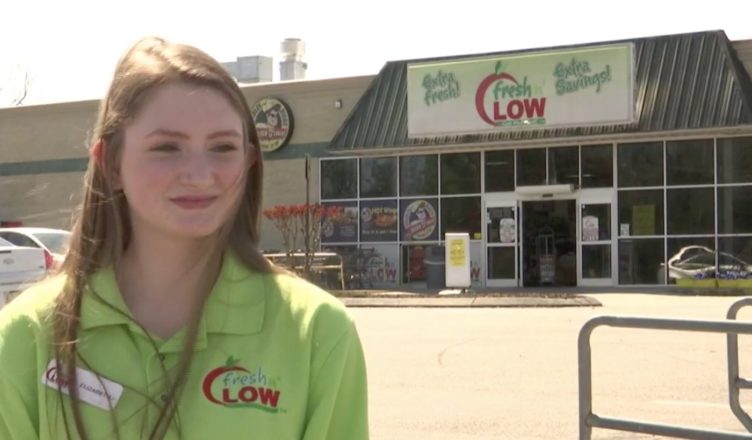 It has come to everyone’s attention that a cashier at a grocery store who is only 17 years old went above and beyond the call of duty to assist an elderly customer called Layne McKeel.

Since the beginning of the novel coronavirus outbreaks, McKeel has had a difficult time leaving his house for any significant amount of time.

The previous week, he had just finished picking up his disability payout when he made the decision to travel to the Fresh n’ Low grocery in Georgetown, Tennessee, to get some groceries and other necessities.

Elizabeth Taylor, a teenage worker at the grocery shop, had just completed ringing up McKeel at the checkout when he was disturbed to see that he was short $33 of his final $173 cost.

After describing his predicament to Elizabeth, McKeel was about to return some of his products to the shelf; but, before he could do so, she asked that she pay for all of his groceries instead of letting him return any of his items.

It was all very important information, so I was simply like… you know… and he responded by asking, “What do I owe you?”

Elizabeth recalled to WRCB that she had responded, “And I was like nah, everything’s fine, I’ll take care of it, it’s okay.”

When Elizabeth was asked what motivated her to be so helpful to a complete stranger, she simply shrugged and responded, “We’ve seen a lot of older people, and they’re all trying to buy groceries, and a lot of places have ran out of stuff, and so the older people are kind of taking the downfall for that.”

Simply said, I do what I can to help others whenever I can.

On the other side, McKeel was incredibly moved by the gesture, and she responded by referring to the person as a “angel” and “the light of day.”