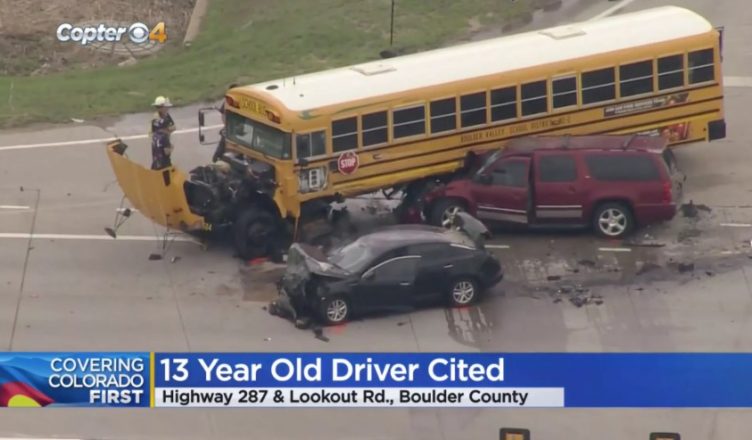 The collision, which the police said was caused by a 13-year-old girl who took her parents’ Chevrolet Suburban out without their knowledge, reportedly did not result in any serious injuries to anyone.

A four-vehicle collision that took occurred early on Friday morning in Colorado is suspected to have been caused by a young driver who was under the legal driving age.

According to CBS Colorado, the preliminary findings of the investigation conducted by the Colorado State Patrol (CSP) found that a 13-year-old girl was to blame for the accident in eastern Boulder County that involved a school bus.

The girl had taken her parents’ Chevrolet Suburban without their knowledge.

Four people were sent to a neighboring hospital, however none of them were believed to have serious injuries. However, according to KUSA 9, one 66-year-old guy was reported to have mild injuries.

One kid and the driver were both on the bus at the time, and the driver was the only one who was hurt. The driver of the bus had only begun their journey, and an additional bus had been sent to finish it.

The accident took place around 8:11 a.m. local time at the intersection of U.S. Highway 287 and Lookout Road. All four vehicles sustained significant damage as a result of the collision.

The girl driver, who was only 13, was issued a citation and then returned to her parents. According to CBS, it is not anticipated that she will be placed in jail.

According to KUSA 9, the investigation caused the eastbound lanes of Lookout Road and the southbound lanes of 287 to be closed for several hours. However, they reopened by 11:30 in the morning.