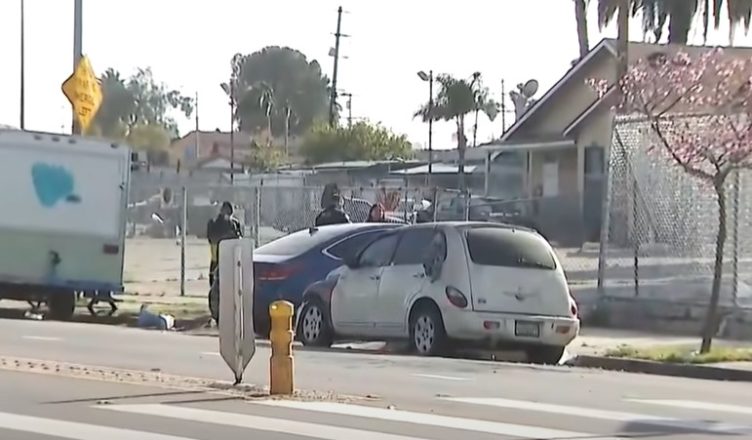 Gene Kang, a reporter for the California television station KTLA, was in South Los Angeles on Thursday to cover a fatal accident that occurred on February 26 near the intersection of 84th and Hoover.

During his live shot, there is a collision between two cars that can be seen just behind Kang. After after, the TV crew started filming one of the automobiles as it sped away from the scene of the accident.

“As the car came hurtling towards us, our security guard Walter Mann yelled at us to “get back,” and we stepped out of the way.

At the very last second, it made a sharp turn and crashed head-on into the car “Kang related the story to KTLA.

According to the station, law enforcement investigators were able to recover a license plate that had fallen off of the vehicle that was seen driving away.

“What a disaster! Yesterday, I was covering a story about a fatal hit-and-run accident “In a tweet on Friday, Kang discussed the incident and mentioned it.

“I was pointing out one of the most hazardous streets in #LosAngeles (Hoover & 84th Street), and then this occurred!” he continued.

“I was pointing out one of the most dangerous streets in #LosAngeles.” “We phoned 911, assisted the victims, and shared this footage as well as the license plate information with @LAPDHQ. Stay safe! @KTLA.”

As of Friday afternoon, the video of the collision that was uploaded to KTLA’s channel on YouTube has already racked up more than 418,000 views.

KTLA reports that over the course of the past two years, there has been an increase in the amount of collisions that have occurred at the intersection in South Los Angeles.

Jemmy Chavarria, 42 years old, was killed in the event that took place on February 26.

He was out strolling with his wife and their 2-year-old son when he was struck by a car who has not yet been identified.

The authorities are willing to pay a reward of up to fifty thousand dollars to anyone who can provide information that will lead to the identification of the driver, his arrest, and his conviction.