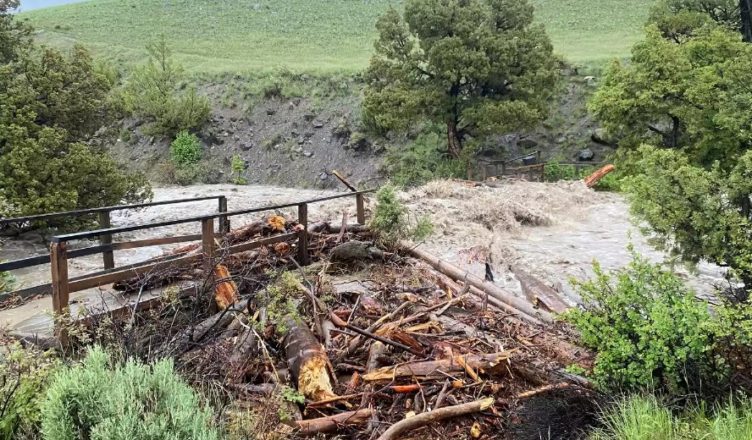 Since the flooding at Yellowstone began, no one has been hurt or killed.

All entrances to Yellowstone National Park have been shut down because of dangerous conditions caused by record rainfall.

A news release from the park on Monday said that the closures are likely to last at least until Wednesday. So far, no one has been hurt or killed.

The superintendent of the park, Cam Sholly, said in a statement that the closures were because of “record flooding events and more rain in the forecast.”

Sholly said, “Our top priority has been to get people out of the northern part of the park, where there have been multiple road and bridge failures, mudslides, and other problems.”

In one scary example, The Washington Post said that between Sunday and Monday, the Yellowstone River at Corwin Springs, Montana, rose six feet, making it the highest level since 1918.

According to the Associated Press, the flooding also cut off access to the town of Gardiner, Montana, which has about 900 people and is near the north entrance to Yellowstone.

“The town of Gardiner is currently cut off from the rest of the world, and we are working with the county and the state of Montana to help residents who are in some places without water or electricity,” Sholly said on Monday.

Elizabeth Aluck, who lives in Gardiner, told CNN that the river near her house “has never been this high before.”

The news source also said that as of Monday afternoon, Aluck said she couldn’t leave the area because the roads and bridges had been washed away.

The AP said that the flooding is happening at the start of the busiest time of year for tourism. June is one of Yellowstone’s busiest months because school is out for the summer.

Sholly said that park officials planned to start moving people out of the southern loop of the park later on Monday because they thought flooding would get worse.

“We won’t know when the park will reopen until the flood waters go down and we can look at the damage all over the park,” he said. “There’s a good chance that the northern loop will be closed for a long time.”

In a video posted to Twitter by the National Park Service, parts of the park’s North Entrance Road that runs through Gardner Canyon between Gardiner and Mammoth Hot Springs can be seen “eroded and washed out in several places” because of the high water levels in the river next to it.

Cory Mottice, a meteorologist with the National Weather Service in Billings, Montana, told the AP that the flooding would not have been as bad if the snow on the tops of the mountains wasn’t still melting.

Mottice said, “It’s a lot of rain, but the flooding wouldn’t be this bad if we hadn’t had so much snow.” “This is a flood like we’ve never seen before in our lives.”