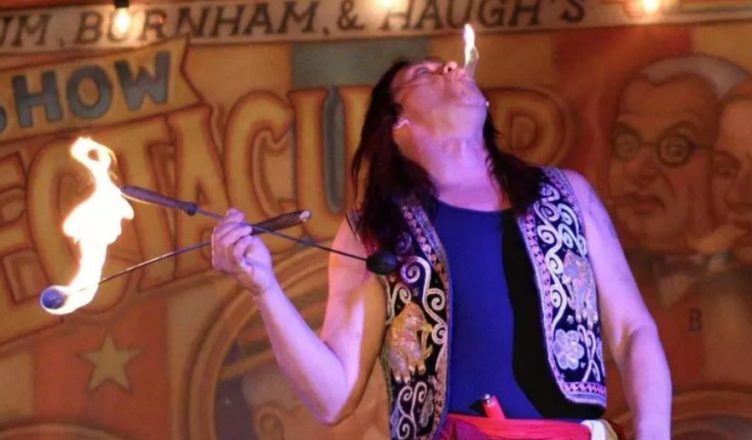 A sword swallower from San Diego has said that he will never perform with swords again after getting life-threatening injuries during a show on Oct. 31 at Six Flags America near Washington, D.C.

Scott Nelson, also known as Murrugun The Mystic, went into a medically induced coma for a month and had multiple surgeries.

He wrote on his Facebook page that he won’t be able to work for three to four months and will have a lot of medical bills.

“No more swords will go down my throat. I will never, ever, ever put my mother through this again “He told KGTV, an ABC station. “I thought I was going to die for sure.”

The injuries happened while he was doing a trick with five swords that were between 24 and 28 inches long and about a half-inch wide, the news outlet said.

Even though he has been performing for 25 years, he felt sick about 15 minutes after starting the stunt, which was about a third of the way through his act.

So, he told KGTV, “I let go too soon, and they rocked off each other and cut themselves apart.”

After he was rushed to the hospital, doctors saw that the swords had cut his stomach and pierced his liver.

“The good news is that I’ve stopped smoking and lost more than 50 pounds,” he wrote in a GoFundMe page set up for him.

Even though this is his second problem, he calls himself “the most dangerous man in show business” and a “ace of swords” on Instagram.

He posted pictures of his injuries from a hospital bed on Facebook and said, “I had no idea how bad this was.”