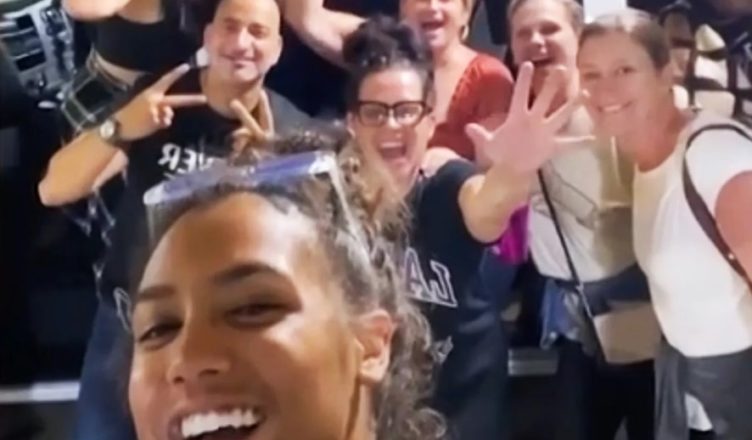 After their flight was late, a group of strangers decided to do something about it. So, instead of waiting for the next flight out of Orlando, they rented a van together and drove for more than 10 hours to get to Knoxville, Tennessee.

Alanah Story, whose TikTok videos about the trip went viral, told Today that her mom heard about the one-of-a-kind road trip while waiting in line for customer service after their Dec. 4 flight was canceled.

“She yells at me, ‘Alanah, we’re going downstairs to get this van with all these people!'” Story was told to the press. And that was the end of it.

Story introduced herself, her mother, her godmother, and a group of 13 strangers who became known as “the gang” in the first video she posted about her trip.

“I can’t make this up,” she wrote in the video’s description, which as of Thursday had over 3.6 million views.

Story said that at first, she didn’t think the video would get a lot of attention.

“But within, like, 30 minutes, it starts to get hundreds of thousands of views,” Story told Today. “The people in the van are always refreshing my page.

They’re like, “Oh my gosh, we have this many views,” and they’re reading the comments out loud the whole time.”

Since the first video was so popular, it was time for an update after a few hours.

At the beginning of the second video, Story said, “Okay, we’ve been on our impromptu road trip for three hours.” “We are now in Georgia, so I’ll let everyone tell what’s new.”

According to Today, the camera first turned to Carlos Cordero, who was traveling with Mikayla Puckering, his future stepdaughter, and her mom, Laura.

Carlos was very determined to get to the University of Tennessee in time for Mikayla’s tour the next morning.

Cordero, who was driving, said he wasn’t tired and was “ready to go” for “another five hours.”

“I’m number two. I don’t know what that means, but it means I get to sit in the passenger seat, which is fine with me,” said Seth, who was stranded while visiting friends.

Michelle Miller, who is known as “The Farm Babe” in the agriculture industry, was trying to get to Knoxville to give a keynote speech. Her update was simple: “I just like snacks.”

Another passenger joked, “Y’all know I’m dying first,” and pointed out that this kind of thing doesn’t always end well in movies.

The last news came when they finally got off the road the next morning.

At the beginning of the clip, Story said, “It’s 8:30 in the morning, and we just got to Knoxville, so let’s wrap up this story.”

Cordero reintroduced himself as “Carlos the Driver” and talked about how thankful he was for the opportunity.

“My baby girl really wanted to make this appointment at the University of Tennessee,” he said, adding that she would be able to do so “because the community came together.”

Playfully, he added, “And to the university, this is how committed my family is going to be.”

As for the person who rode with him? Seth said, “I tried to sleep through a lot of it, but I like to think I was good moral support for Carlos, so we’ll go with that.”

When this family found out their kids were going blind, they went on a world tour to make visual “memories.”
Mikayla also gave a shoutout on TikTok to the “pretty cool” strangers.

She joked in the post, “I was just trying to get to my college tour, but I ended up on a road trip with a bunch of strangers from the airport in a creepy white van.”

But Mikayla wrote in the caption that “These strangers were pretty cool, though (well not strangers anymore). Thank you for making it possible for me to visit my college!”

Story said that their trip went viral because it was “good, clean fun” that showed people helping each other out when things were hard.

“You can see how different we are in my video. And, you know, I feel like we’re so divided right now, and to see a bunch of strangers who are so different from each other come together and just enjoy a crazy situation together, “Today, she said. “I think it makes sense to a lot of people.”