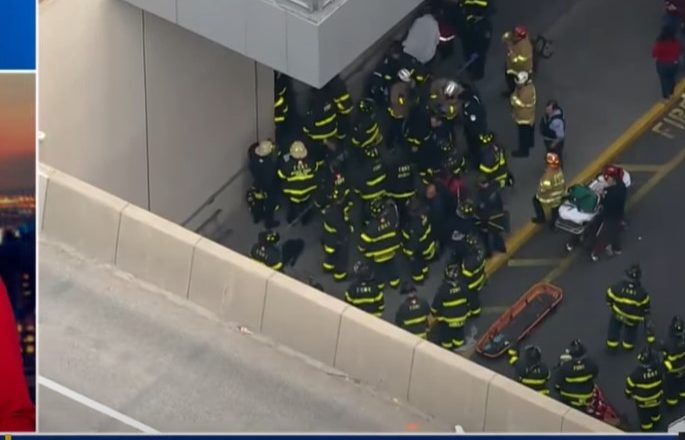 Two people fell down an elevator shaft at a Target store in the Bronx on Thursday. They were saved.

“At about 11:15, we got a call that two people had fallen down an elevator shaft and needed help. We got back to you in about three minutes, “In a statement, the New York City Fire Department said

According to their preliminary findings, a 29-year-old store worker was “escorting out” a 16-year-old alleged shoplifter when “a physical dispute ensued,” a spokesperson for the New York City Police Department said in a statement that PEOPLE got a hold of.

Then, “both men fell against the elevator doors and down into the shaft,” the spokesperson said, adding that the investigation is still going on.

WABC and WCBS-TV say that the people fell three stories.

Even though firefighters said they were able to get one of the victims out of the elevator shaft “immediately,” they said it was “a little harder” to get the other person out.

The first victim, who WABC said was a teen, was found “on top of the elevator.” The other victim had fallen “past the elevator” and “into the elevator pit,” which was about 10-15 feet below.

Deputy Assistant Chief John Sarrocco told WCBS-TV that firefighters had to “secure the elevator” and break through a wall to set up a “rope system” before they could finally pull the victim out of the pit.

Sarrocco said it took about an hour to save the people.

The teen was taken to a local hospital with serious but not life-threatening injuries, according to WABC.

Sarrocco told reporters at a press conference on Thursday that the other victim was taken to the hospital in “critical” condition.

Even though more information about his injuries has not been made public, WCBS-TV said that he is expected to live.

“Our hearts go out to those who were hurt in this tragic incident at Bronx Terminal Market,” a Target representative said.

In a statement obtained by PEOPLE, a spokesperson said, “We’re grateful to the FDNY and NYPD for their quick response.”

“The incident happened in an elevator shaft next to our store’s entrance. We are fully helping the NYPD with their investigation, as are the mall owners.”

Sarrocco told the media that the rescue operation on Thursday was “the best the FDNY has to offer.”

“The training that the FDNY Fire Operations and FDNY EMS Operations do every day to be able to do a technical rescue like that, working together to save the life of the person who was under there, is just amazing,” he said.

“Every day, we train for situations like this, so when they come up, we’re ready to go.”