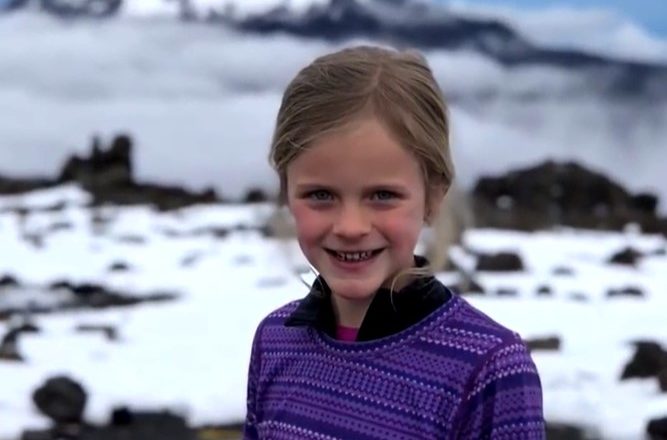 It was a 7-year-old girl who just recently became the youngest female to walk Mount Kilimanjaro. She did it because she wanted to be closer to her dad, who is now in heaven.

After reaching the peak at an elevation of 19,341 feet in March, Montannah Kenney, a second-grader from Austin, Texas, was able to claim the title of youngest person to ever hold the world record.

She was thrilled about the possibility of breaking the record, but what she really wanted was a chance to communicate with her father, who had died when she was just three years old.

Hollie Kenney, Montannah’s mother, shared with Inside Edition that her daughter is aware that an angel is watching over her and that he resides in paradise.

“Since she was aware that this mountain is higher than the clouds, she made the connection that when she got to heaven, she would be nearer to her father.”

She continued by saying, “It was really lovely.” “She understood that she needed to wave and blow kisses at him in the hopes that he would see her,” she said.

Hollie estimates that the journey to the top will take roughly six days to complete.

The mother and daughter team found the first day of the climb to be rather easy; however, the next days of the trip were challenging because of the pouring rain and the frigid temperatures.

The previous youngster to hold the record was Roxy Getter, who was only 8 years old when she climbed Mount Kilimanjaro with her family last year.

Despite the fact that both she and her brother have had heart problems for the majority of their lives, Roxy and her family still managed to complete the ascent.