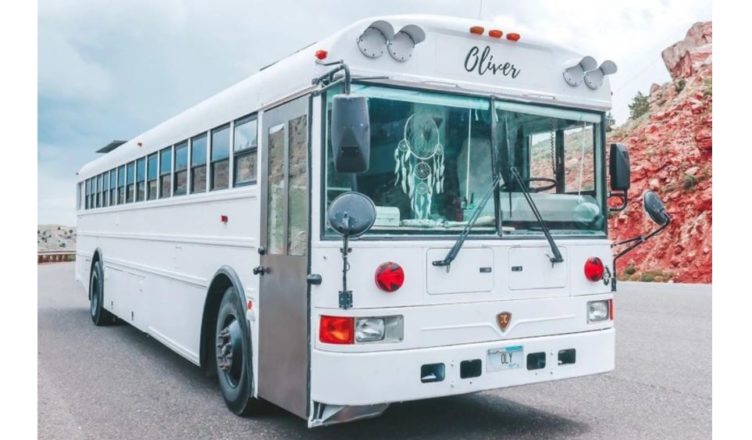 Even though Mike and Tawny seemed to have it all on the outside, they were not actually happy in their lives. Therefore, the daring couple decided to sell all of their possessions, purchase a school bus, and turn it into a mobile home as a way to live a new lifestyle. This is how it changed.

Mike McVay and Tawny met at the gym where they both worked. After a few more months had passed, they came to the conclusion that their relationship went beyond that of friends, and not long after that, they were married. It seems that they had a picture-perfect life. 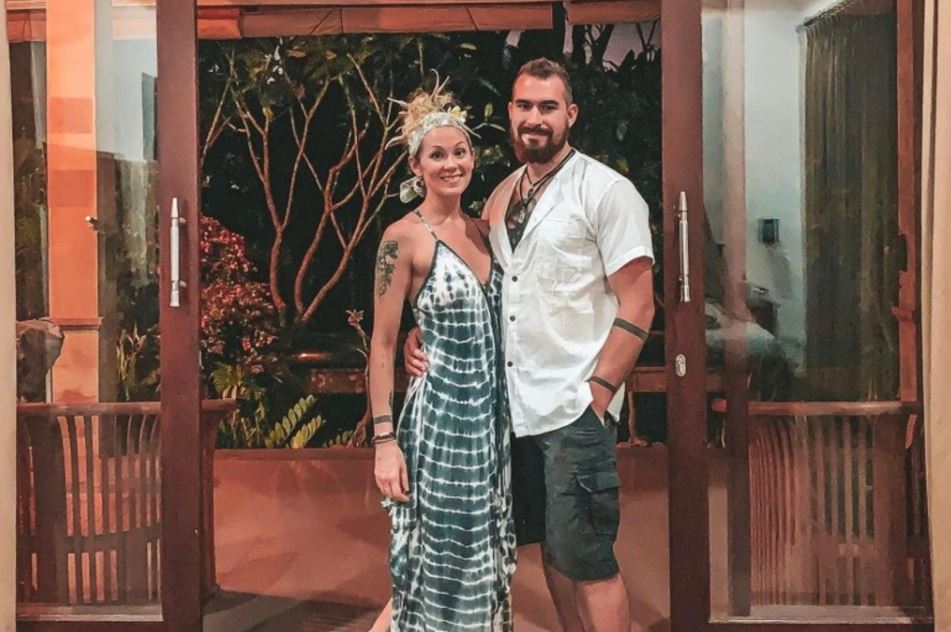 After the wedding, the couple started their own fitness center as a new business together. Mike and Tawny were very successful in all aspects of life: they had a beautiful house, a collection of beautiful cars, and ran a prosperous business. “On the outside, we had everything that we were promised when we were little would make us happy,” Tawny said. “But what we wanted, or at least what we believed we wanted, was clearly not making us happy.”

Despite the fact that they had all they need, the two sweethearts were not pleased with their lives. Tawny said in an interview that “we suddenly looked around, and it was like, ‘What are we doing?'” while describing the moment. And so they decided to get out of town and booked their first vacation to Europe. 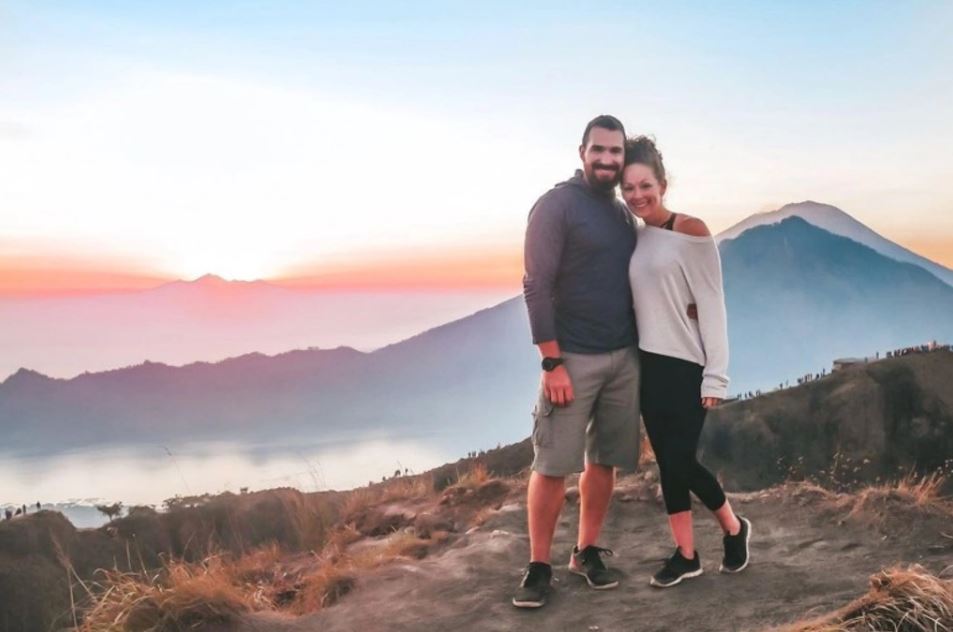 Once they were out of the country, they saw that what was missing from their lives was the freedom to travel. Tawny said, “We don’t want to be stuck in one place.” The couple had the goal of traveling the world full-time, citing that they “don’t want to be doing the same thing and living the same day over and over again.”

But they were worried about how they would pay to turn their dreams of traveling into a reality. The couple’s search for an answer led them to the skoolie community, where they discovered the solution they were looking for: a school bus that they could turn into a mobile home. “The most important thing we had to do was get rid of the shame and guilt that came with wanting something different,” Tawny said. “That was the biggest thing we had to do.” 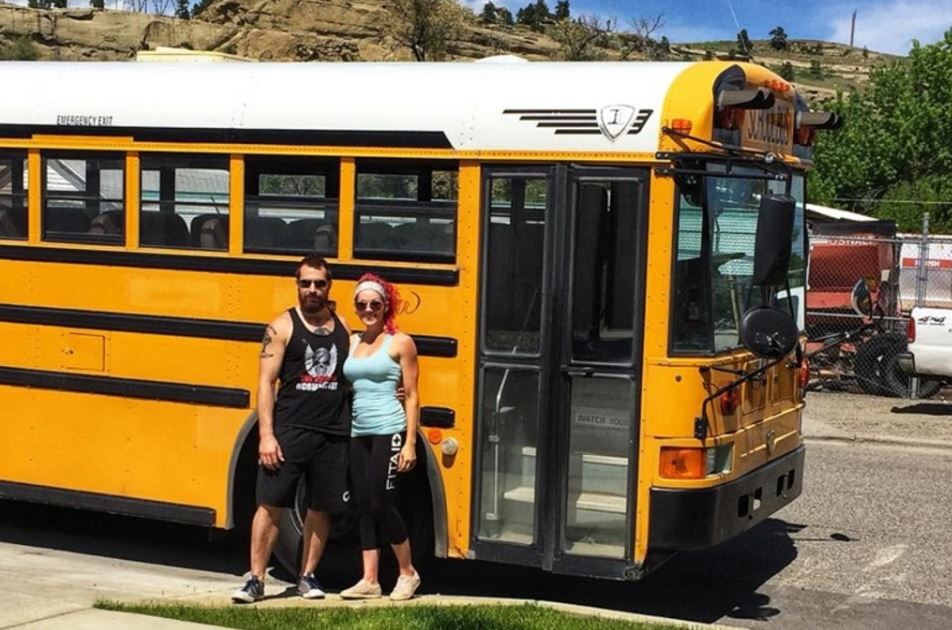 She went on to say that “the most difficult adjustment was letting go of the traditional and “normal” life in favor of the one that we genuinely wanted.” And soon, it was too late to turn back. Mike and Tawny were able to purchase their new home, a yellow 2004 International school bus, for the cheap, low price of just $5,000.

Mike and Tawny chose to turn a school bus into a small home instead of buying an RV or a tiny house on wheels for a few reasons. To begin, the purchase of a bus gave the couple the opportunity to completely personalize their future home. Also, they thought it would be easier to drive a skoolie. 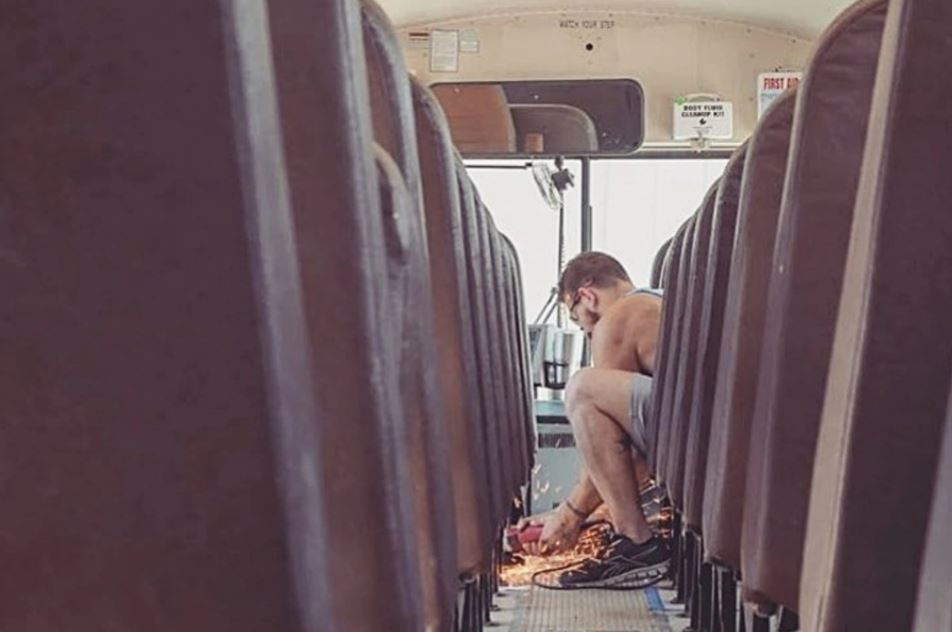 But first, Tawny and Mike had to destroy the existing interior of the house before they could start creating their ideal home from the scratch. The two were required to pull away the existing chairs, walls, and even the floor of the space. As inexperienced builders, they planned to complete the project entirely on their own.

It took the DIYers around two days to remove the vehicle’s 20-plus passenger seats. After that, they removed the old metal flooring and the subfloor, only to discover that there was a significant amount of rust underneath. But before they started fixing up the skoolie, Tawny and Mike taped out their floor plan. 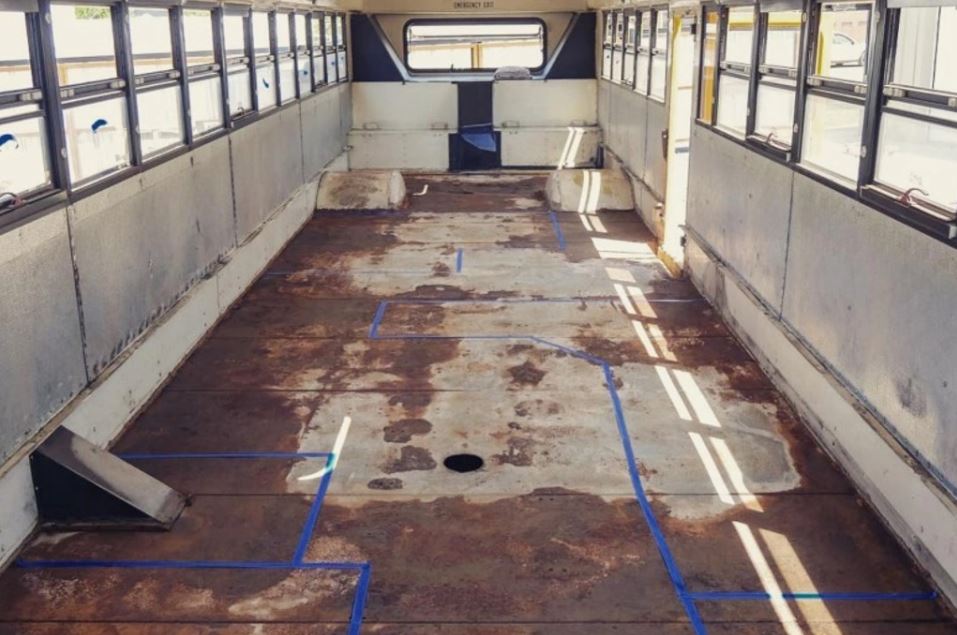 Even though the bus was only 250 square feet in size, the couple was able to put almost all of their typical home conveniences into it thanks to the design they came up with. When they were done, the skoolie would feature a living room area, a kitchen, a bathroom that was completely furnished, and a space that was plenty in size for the bedroom.

Before Tawny and Mike began work on the subfloor, they first addressed the rust issue. It was an expected step, since the school bus had been in use since 2004. The DIYers fixed the holes in the floor and painted over the rust with Rust-Oleum floor paint. 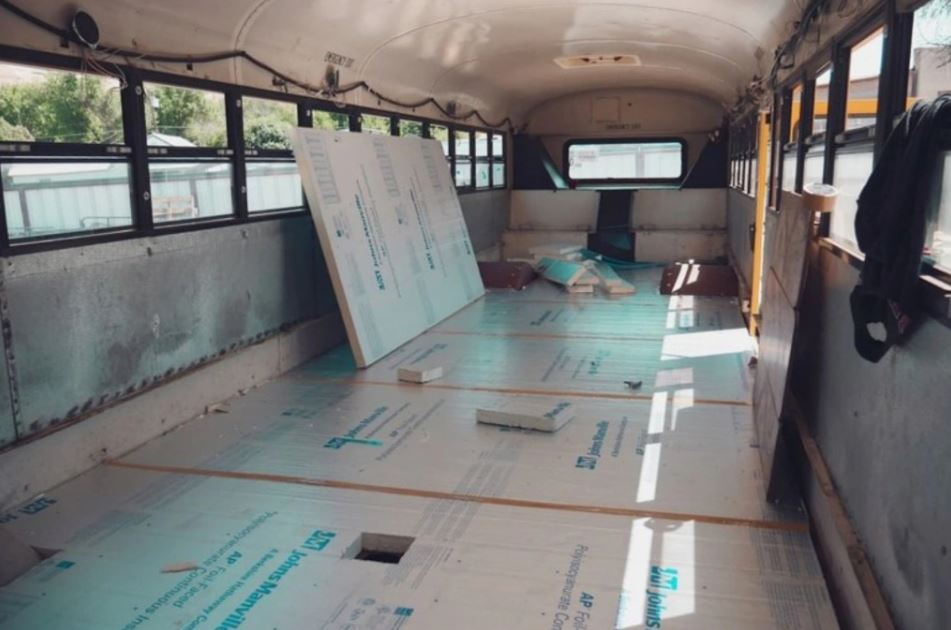 After that was fixed, it was time to start putting in the new floor. Because the couple will be traveling in a wide variety of climates, proper insulation was important. Mike and Tawny constructed the floor’s framing and then added rigid polystyrene foam boards, both of which are known to as styrofoam insulation.

After insulating the skoolie, Tawny and Mike measured and cut the new subfloor panels so they would fit perfectly. When asked about it at the time, Tawny said, “We have a floor, and all of a sudden, this seems more real.” The DIYers didn’t bolt the subfloor to the insulation. Instead, they went with a “floating” subfloor. 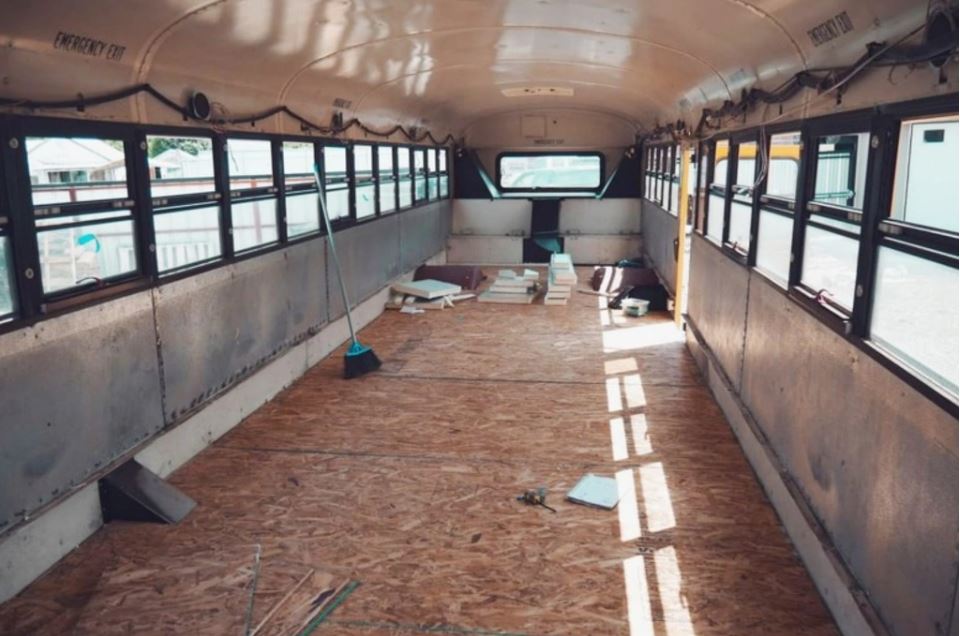 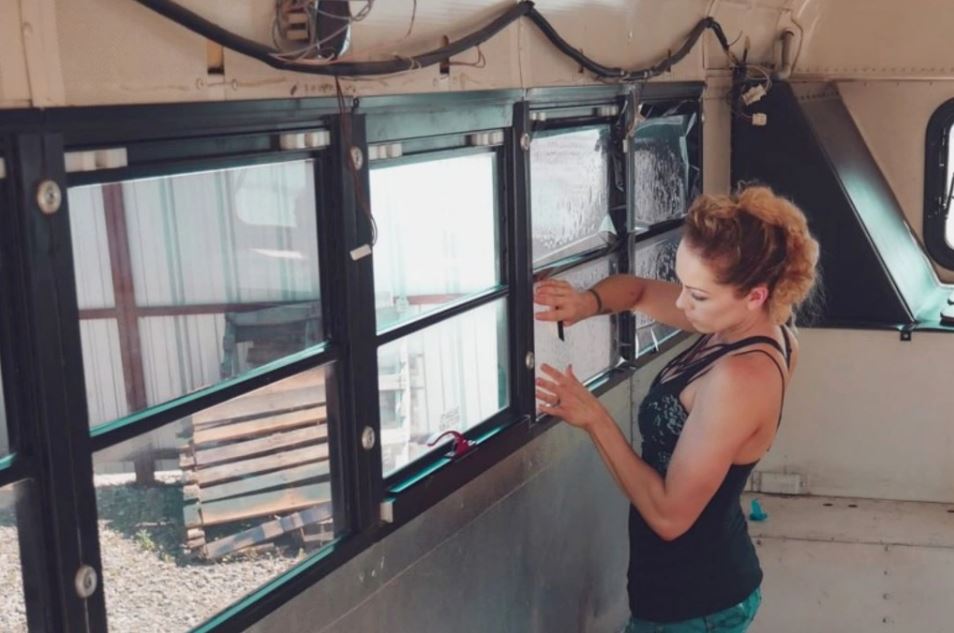 The couple decided to install a thermal barrier tint in the motorhome’s windows in order to maintain a comfortable temperature within the vehicle and to increase the level of privacy provided by the windows, which were not ultimately covered by an inside wall. Tawny noted that it was a significant benefit for them that they did not have to sacrifice the aesthetic of the school bus windows from the outside by replacing them with metal.

The beginnings of the walls for the bedroom, bathroom, and hallway may be seen in the pictures below. The bus’s engine can also be found in the back. Tawny and Mike came up with an alternative plan to the one that is followed by some skoolie owners whose buses have a rear engine. These owners prefer to divide the area off from the rest of the bedroom. 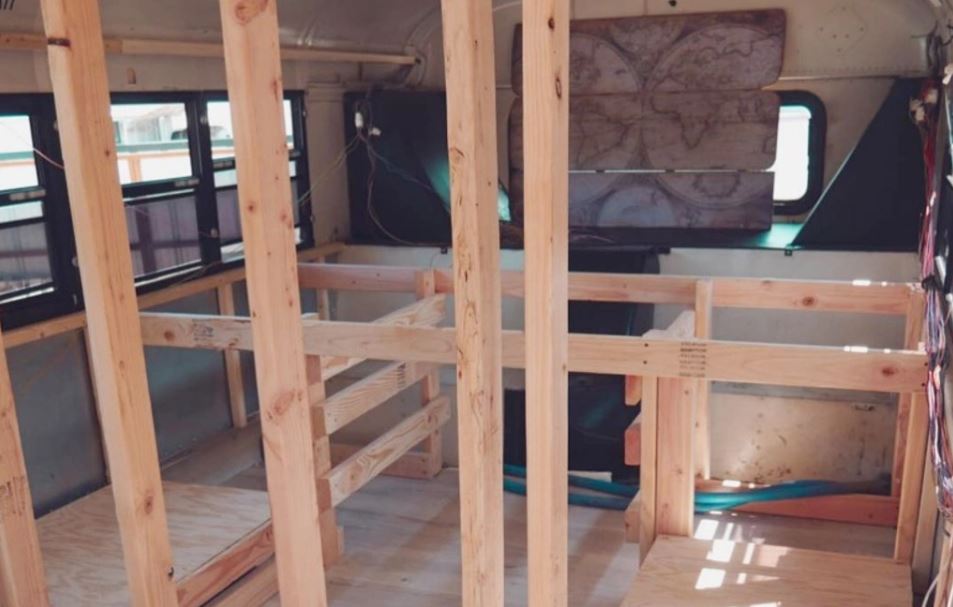 These skoolie owners, like the owners of most bus conversions, made sure their bed was high enough to allow a lot of storage room beneath. The DIYers built four flaps into the top of the bed so that they could get to the storage without having to lift everything up at once. 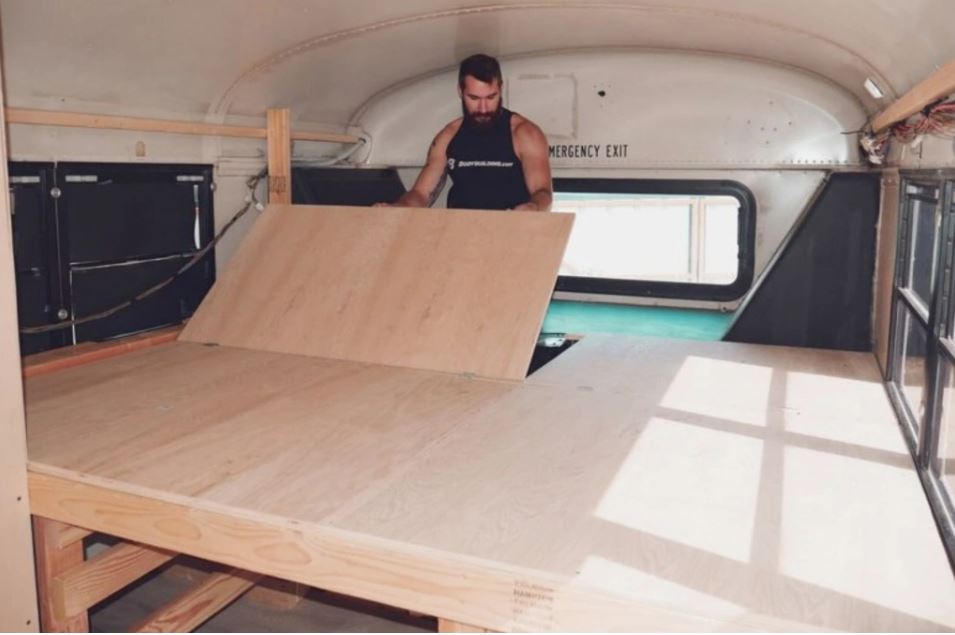 Both the living room area and the bedroom were making good progress towards completion. They knew that they would sometimes be traveling with Tawny’s two teenage kids, whom she co-parents with her ex-partner, so they made sure that there was enough space on the skoolie for the kids, as well. 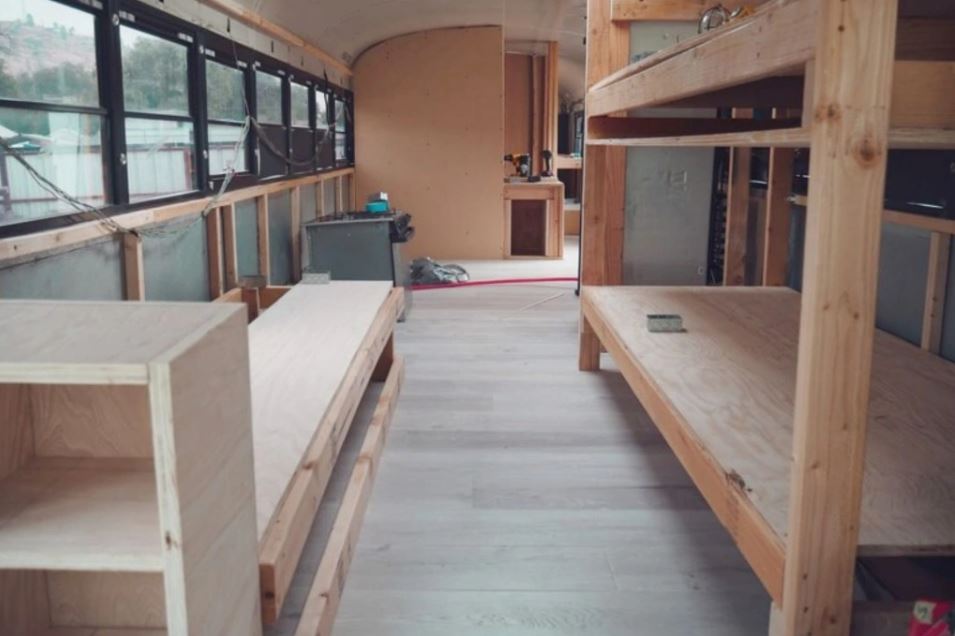 Even though the hands-on family spent the most of their time during the renovation preparing the inside of the skoolie, they also worked on beautifying the outside of the vehicle. Before applying the last few coats of white paint, they gave the metal a layer of “special metal paint from Rust-Oleum that had primer” in it. 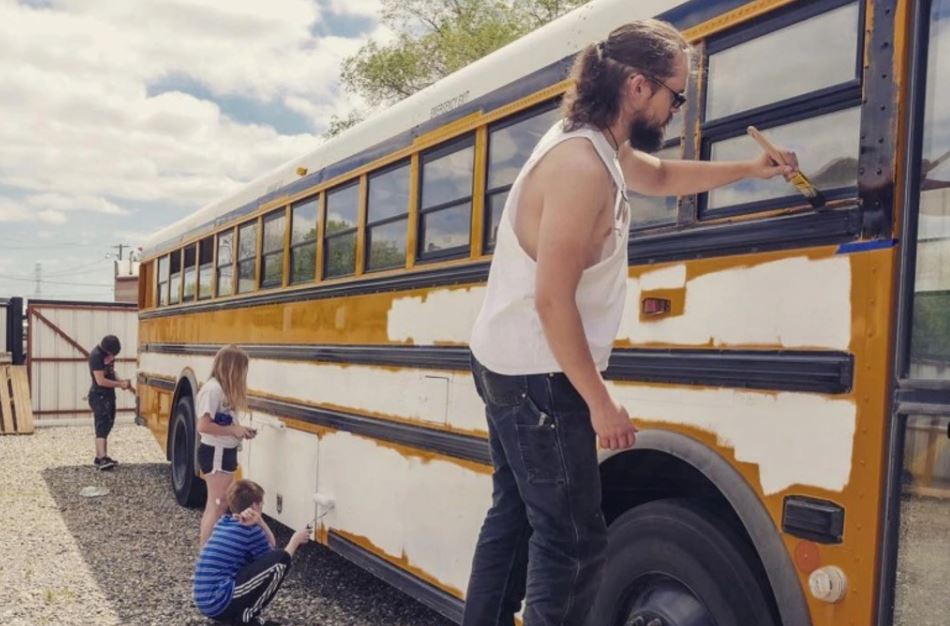 By the time the school bus conversion was done, the original cheese bus was unrecognizable. The additional layers of paint completely transformed the appearance of the skoolie, which Tawny and Mike had given the name “Oliver.” In addition to this, the original windowed entrance was changed out for a door that has a more unique look. 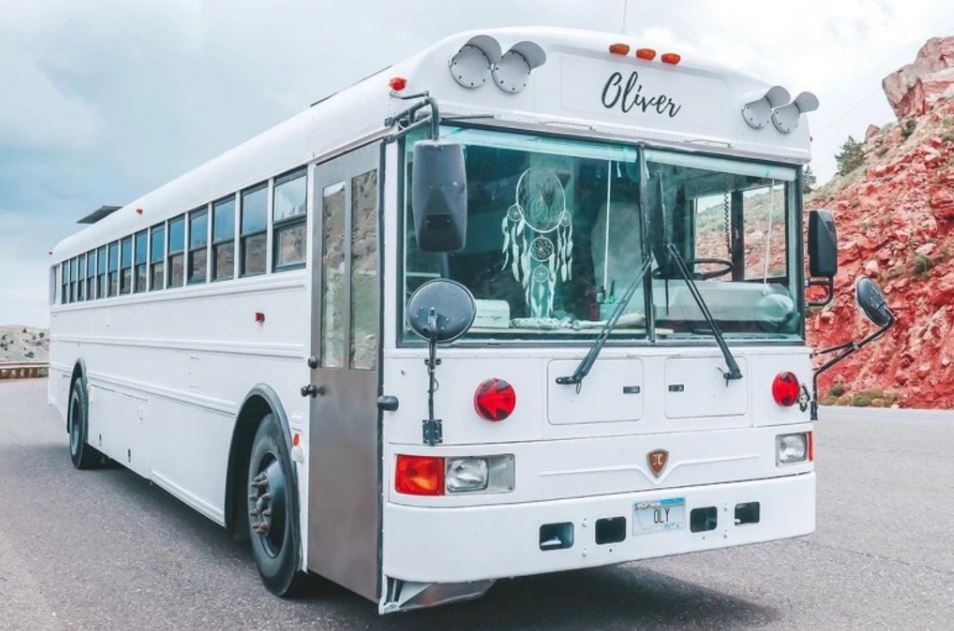 The roof of the skoolie also got a lot of new features, like an 8-foot-long deck that’s great for taking in the view. Tawny mentioned that she does yoga up there, they watch the stars, and the kids come up to play board games with them. “It’s almost like taking our outside environment with us wherever we go.” 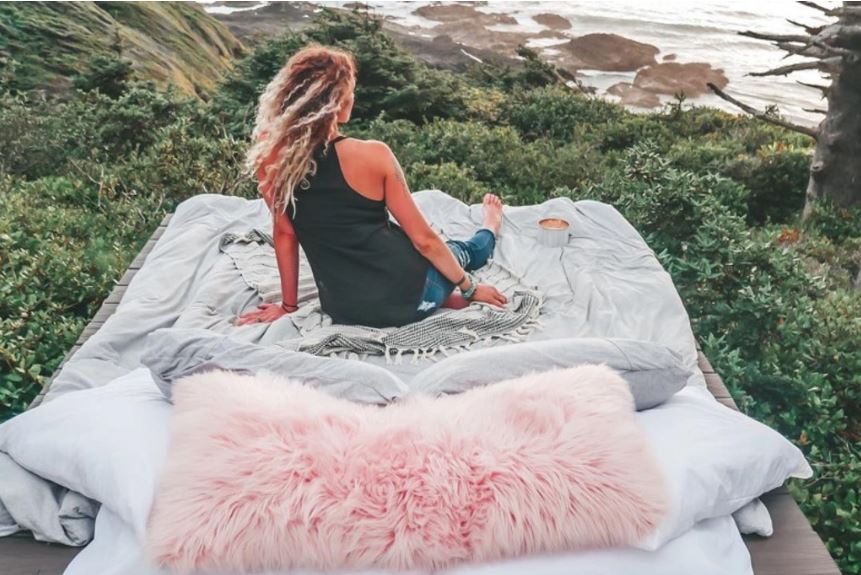 Scroll down to see the end results, and share your thoughts about this beautiful project in the comments section. 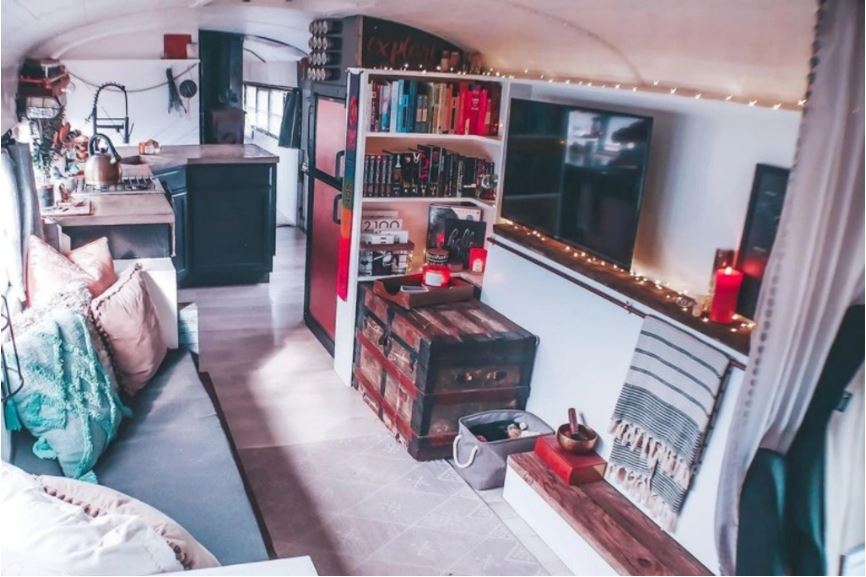 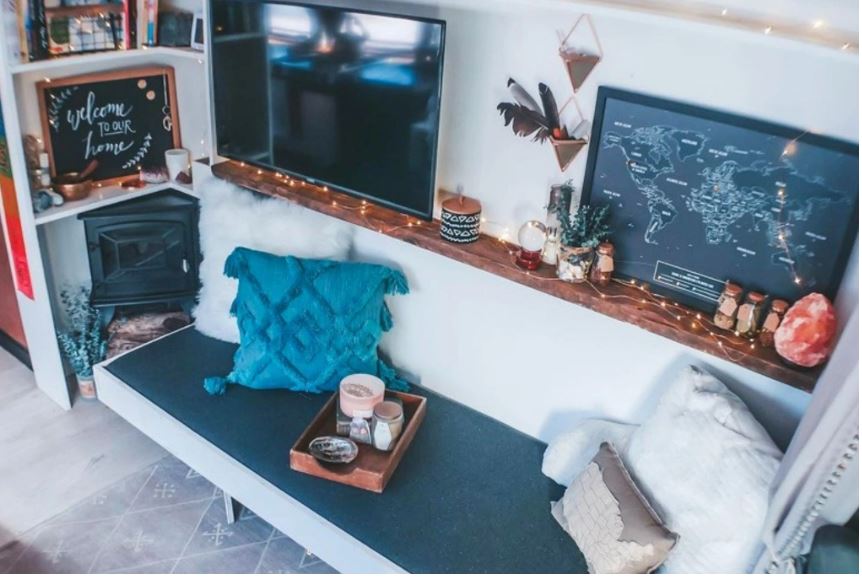 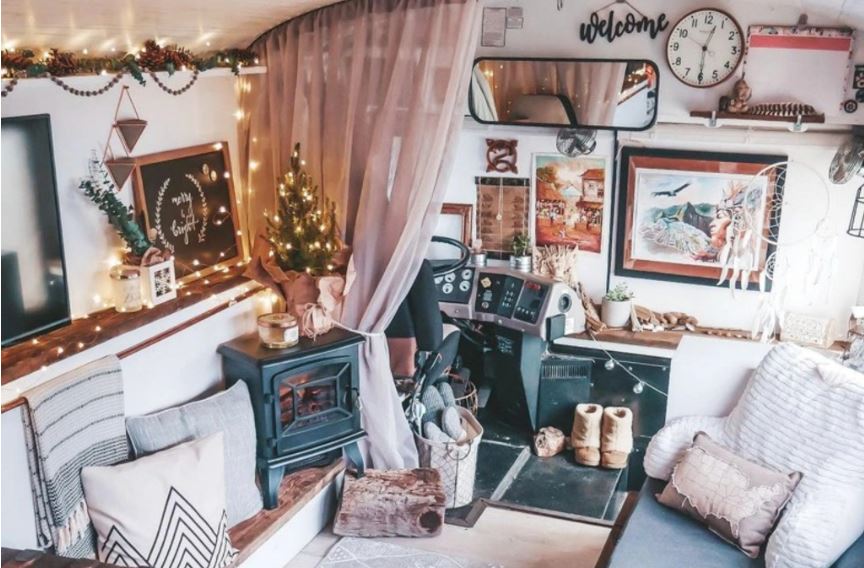 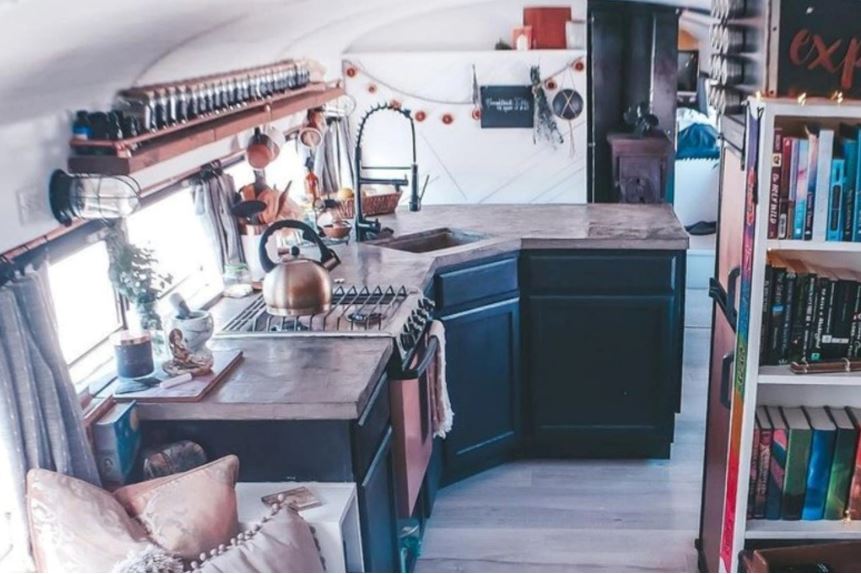 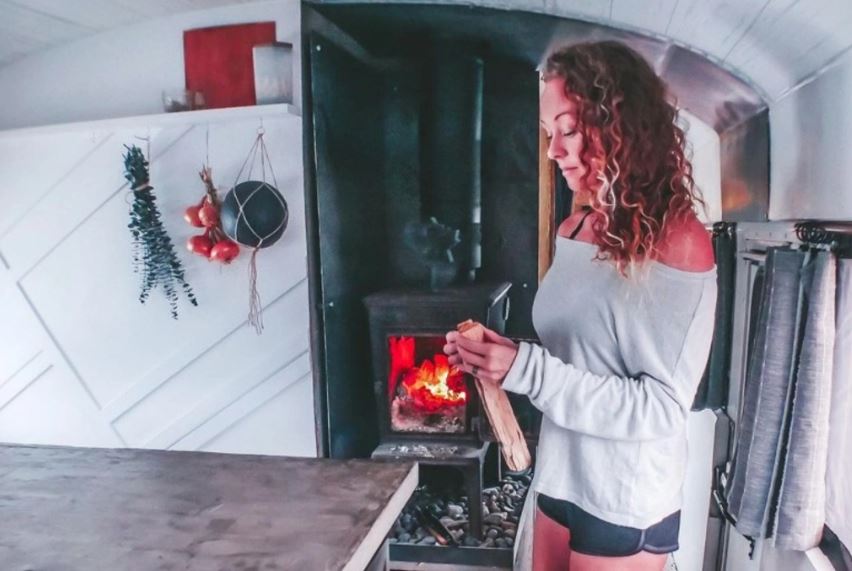 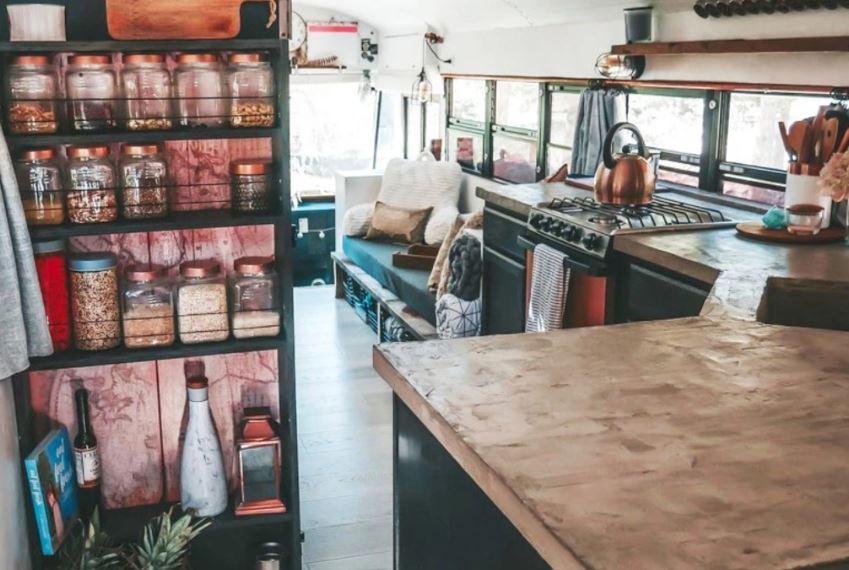 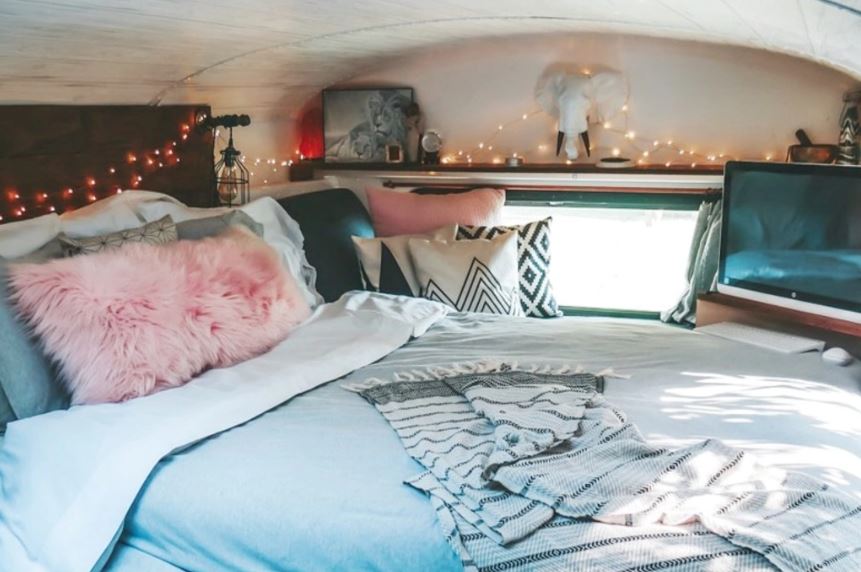 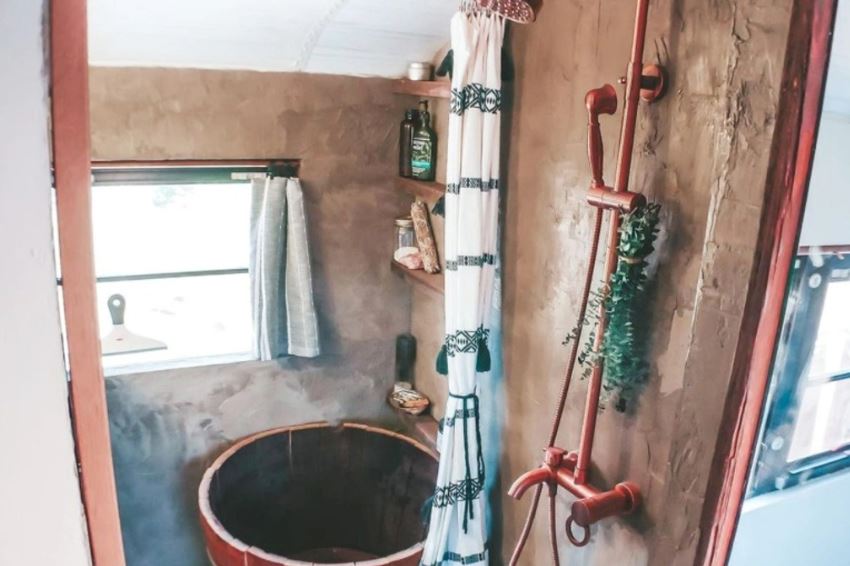