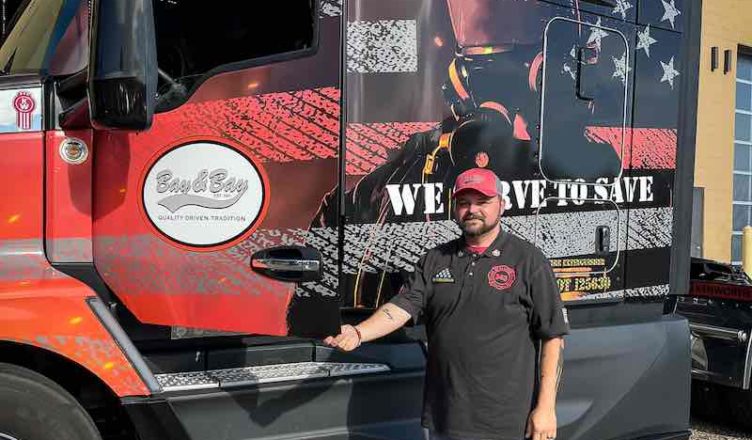 A truck driver from Greenville, Texas, was dubbed a “Highway Angel” for rendering treatment to two injured motorists after witnessing an extraordinary collision.

Two weeks ago, Tony Doughty was travelling eastward on Interstate 40 near Albuquerque when he saw a red automobile collide with a Jeep at approximately 70 miles per hour. He observed the Jeep roll over before it collided with a concrete barrier.

While Tony was traveling on the opposite side of the highway, the accident occurred. How many individuals would pull over instead of continuing down the road rather than calling 911?

Doughty, a 15-year truck driver for Bay & Bay Transportation in Minnesota, froze in his tracks.,.

Doughty, a volunteer firefighter for the past 12 years, stated, “I hopped out of the vehicle and grabbed my EMT bag.”

A passing police officer stopped just as he was about to cross the highway to reach the accident scene.

When he discovered Doughty’s past as a first responder, he exclaimed, “You’re coming with me, buddy!” The men then hurried to the crash site.

The driver of the red Chevrolet had a broken leg, so Doughty placed a splint on it while the man in his 30s admitted to being either withdrawing from fentanyl and methadone or overdosing on the drugs.

“I sort of stabilized him,” recalled Doughty, who then raced over to the driver of the Jeep, “who was still upside down on the road.” Thankfully, although the young woman was noticeably upset, she was not seriously injured.

Doughty collaborated with the police to convey the crash victims’ vital signs to their dispatch and remained on the scene until the ambulance left.

With over two million kilometers of safe driving under his belt, the excellent trucker is always prepared to assist in the event of an accident… .

“I wear two hats,” explains Doughty. “I’m hardwired to stop and help in such instances.”

Since the inception of the Highway Angels program by the Truckload Carriers Association 25 years ago, 1,300 professional truck drivers have been honored for displaying exceptional kindness, civility, and bravery on the job.