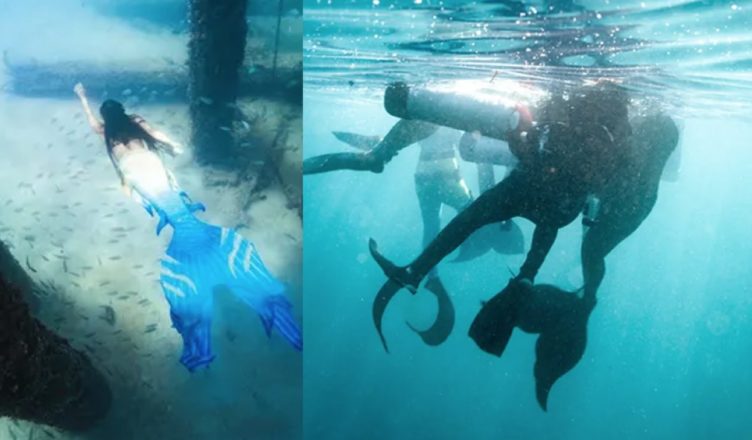 When three mermaids suddenly appeared off Catalina Island in California, an experienced diver was saved from drowning by a rescue worthy of a fairy tale.

On October 23, Pablo Avila lost consciousness while scuba diving with his son and a friend, coinciding with the second day of a nearby mermaid training course.

When everyone heard cries for assistance, a 33-year-old mermaid performer and diver from Miami who was leading a certified diving course in open water acted immediately.

Elle Jimenez and two of her students, all wearing mermaid fins, quickly seized control of the situation by utilizing their training and tails.

Mermaid student Elaina Marie Garcia, a certified diver who also works as a firefighter, reported that by the time they reached Mr. Avila, he was unconscious and foaming at the mouth.

The mermaid pod quickly removed his heavy dive equipment, which can weigh between 30 and 40 pounds, along with underwater weights that can add an additional 35 pounds.․․

“In the water, I gave him rescue breaths,” Garcia told Fox News. “My training kicked in, and I had the muscle memory necessary to quickly and efficiently remove his scuba gear,”

Jimenez stated, “I believe we were all destined for these roles, and that moment proved we were exactly where we needed to be.”

They also instructed a second diver in breathing techniques to calm him during panic and distress.

Garcia was ecstatic that Mr. Avila survived, stating that “it is extremely rare for someone to recover from requiring full CPR to be breathing, speaking, and smiling.”

They hope that the story will spread the word that “mermaiding” requires physical prowess above all else.․․,

“It’s not all pretty tails and smiles; we can also save lives… with grace.”