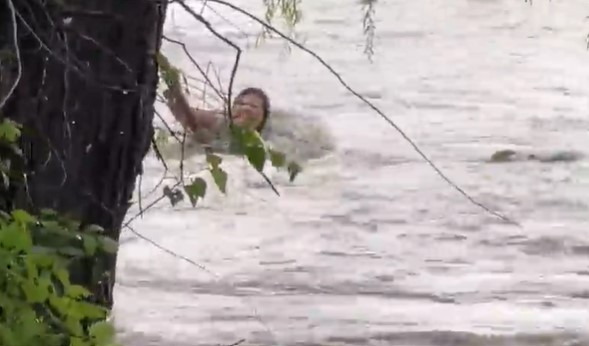 A video of a brave rescue of a woman whose car was washed away by floodwaters in Texas, United States, has gone popular on the internet.

The woman became entangled in the creek after a big rainstorm slammed the Fort Worth region on May 24.

Her automobile was washed away as she attempted to drive through the aggressive stream. She rushed out of her car and grabbed hold of a tree.

A rescue official is seen in the video attempting to toss a rope at the woman, who is neck-deep in water, to help her to swim over to the bank.

According to the video’s description, the woman leapt out of her automobile but became caught in the midst of the stream.

She can be seen clinging on a tree branch to stay afloat. However, the rescue officer soon reaches her with a rope.

After that, the woman is handed a life jacket. And the official binds the woman to himself before swimming back to the bank…

The current is so strong that they can barely hold their balance and strain to stay afloat. They eventually made it out of the creek unharmed.

The terrifying footage lasts little over a minute and was shot by local Howard VanCleave.

According to NBC Dallas-Fort Worth, the woman was “not hut but was a little shook up.”

Several more highwater reports were received and attended to by rescue officials, but this was the only one where someone needed to be rescued. The majority of folks were able to get out of their autos on their own…

According to Michael Drivdahl of the local police department, the network has warned region people to stay clear from flooding.

“You have no idea how deep it is or how fast it is traveling. Tonight is an example of a situation that could have been much worse; we could have been out here recovering instead of rescuing,” Mr. Drivdahl explained.