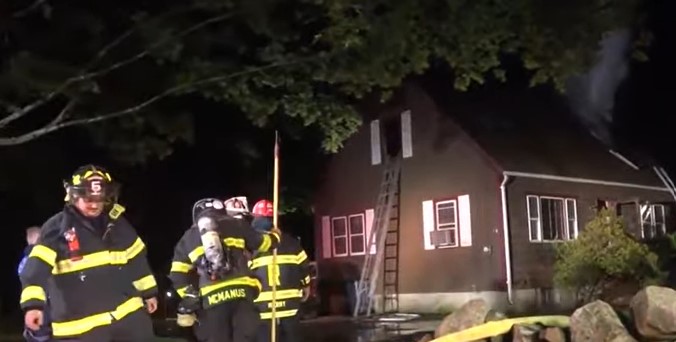 Two decades after losing his wife and two daughters in a house fire, a father in Massachusetts assisted in the rescue of a neighbor from another fire.

According the ABC affiliate WCVB, Mark Collum was at home in Rowley on Sunday when he heard his neighbor, Deb Shanahan, calling for help around 5:00 a.m.

“There were flames blowing out the rear, smoke flooding the kitchen,” he explained to the publication. “I just grabbed her and yanked her out.”

“I had a little smoke in my lungs, as did she, so we just took her outdoors and everything worked out fine,” he added.

According to an Associated Press story published that year, Collum’s wife Lisa and their young girls — Lindsay, 4, and Carly, 5 months — died in January 2001 after a fire broke out at their home in Ipswich.

Collum, a commercial fisherman, was not at home at the time.

While Lisa and Lindsay were trapped by flames on the third level, his wife threw their infant Carly out the window to save her life, according to WCVB.

At a local hospital, she was subsequently pronounced dead..

Crews arrived at the scene of the fire after the Good Samaritan had already transported his neighbor to safety, according to Rowley Fire Capt…

“There’s a side narrative to the whole thing that’s simply ironic,” he explained to WCVB, adding that “I don’t know if a lot of people would do it.”

According to Merry, Shanahan was just slightly injured as a result of the fire. The fire’s origin is still being investigated…