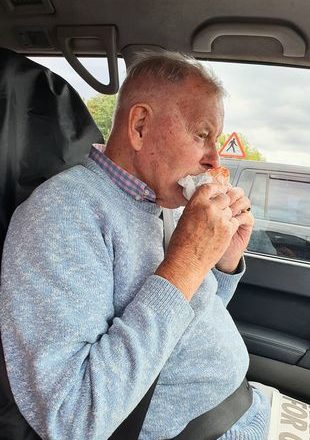 After “lecturing” his family for years about how bad junk food is, the grandfather recently ate some while his wife was away for a few days.

Michael from Yateley, Hampshire, said, “I never knew what to order at McDonald’s because it was always a little confusing.”

But when he sheepishly told his grandchildren on a family trip that he had “always wanted to try a cheeseburger,” they were happy to help him out. 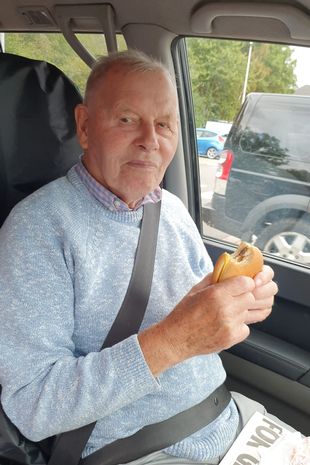 The grandad of 15 told his daughter Charlotte Sheridan, 44, and her two youngest daughters, Poppy Sheridan, 12, and Lily Sheridan, 9, while they were out for the day.

So, they drove by a McDonald’s drive-thru and stopped to take pictures of the historic moment. And I think it’s safe to say that the McDonald’s was a hit.

Michael took a happy “gulp” as he bit into the patty and said, “This is absolutely bloody brilliant.”

Now, his happy granddaughters have asked that they go to the Farnborough Gate branch every week.

Charlotte explained how the trip came about by saying, “My mom went to visit her sister, so my dad was pretty much home alone.”

“He isn’t used to cooking for just himself, and he wouldn’t want to.

“I told my dad, ‘I’m going out, why don’t you come with me and I’ll buy you a McDonald’s?’ “I’ve always wanted to eat a cheeseburger,” he said.

“It took a few seconds for him to say what he thought, and it felt like everyone was holding their breath.

“He took a big gulp, and everyone looked at him. Then he smiled big and said, “I love it.”

“He said that the drive-thru was “absolutely bloody brilliant.”

I asked, “Dad, would you like to lean over and tell them what you’re having?” but he said he wouldn’t know where to begin.” 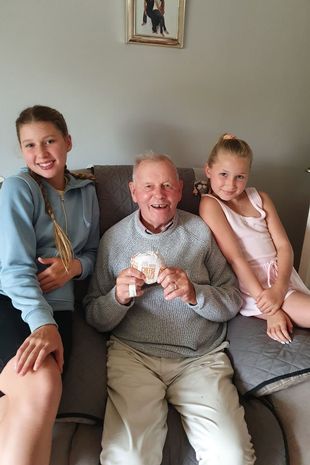 Michael gave his final verdict by saying, “I used to dislike junk food because I didn’t know much about it.

“When I was a kid, we always ate home-cooked meals. Takeout and fast food weren’t an option, so I never really thought about them.

He’s already looking for his next order.

Michael said, “I saw in the paper that McDonald’s has a new burger, a Spanish one. It’s a double thing with salad, two burgers, and dressing.

“I’m likely to come back. It’s really pretty cool. When you walk in, everything is on the screen.

“There’s no time to waste.”