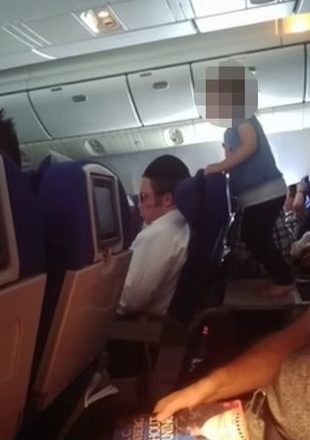 Some people called a video of a child running wild on a plane a “advertisement for condoms,” which made the parents look bad.

A video of the eight-hour flight, which was first posted on Reddit and has since gone viral, shows a young child having fun on the plane, much to the annoyance of other people on board.

One angry user said, “This is why I hate kids.” “Even more so at this age.”

A short video showed a happy, barefoot toddler bouncing up and down on the tray table attached to the seat while a patient passenger in front of them rocked their chair.

The person in front of the child was praised for not paying attention to the active child.

People on Reddit shared their thoughts, and some said that their own parents would not have let them act like that in public.

One person said, “I would never let one of my children bother someone in this way. It’s one thing to talk a little too loud.

It is completely WRONG to let your toddler jump on plane seats while holding onto a stranger’s chair.

“I hope that man got some kind of payment. Most likely, the parents didn’t see anything wrong with this. UNACCEPTABLE!!!”

One more person said, “I would feel like a bad parent if my kids did this and I just let them do it.”

“The bouncing is annoying, but the bare feet on the tray table are just as bad… Clean your stations often, people.”

Other angry Reddit users wondered if the flight attendants should have done something because it may be their job to make sure passengers have as stress-free a flight as possible.

A former flight attendant said that people who complain about them are the ones who bother them the most, not babies who cry.

Kat Kamalani went on TikTok to say that “no one wants that baby to stop crying more than that parent.”

She said, “I promise you, as a flight attendant, nothing irritates us more than when people complain about a crying baby.”

Kat uses her story to talk about other things that really bother flight attendants and to give examples of bad behavior on planes.

Kat said that people should never press the call button when the plane is on the ground or when it is taking off or landing.

The mother of two said, “This drives flight attendants crazy, so we usually don’t even get to it until it’s safe.

“If you hit this while we’re going up in the plane or going down when we’re landing, we won’t even get to the light until after you hit it.”