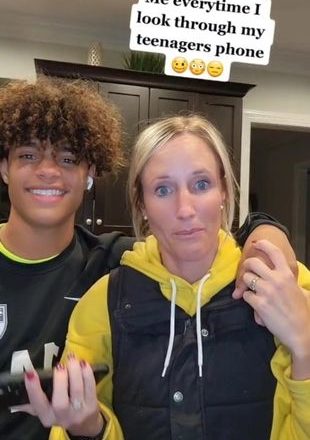 Parents can get worried about what their kids are doing on their phones, but many will leave their teens alone because they think they’ve taught them enough about online safety for the teens to use what they’ve learned.

One mom, on the other hand, has said that she often checks her 15-year-old son’s phone, which is a very controversial thing to do.

Laura Muse, who posts on TikTok as @museparty, defended her decision in the comments on her video by saying, “I pay for the phone and when you have nothing to hide because we can talk openly about life, it’s not a big deal…sorry you don’t have that in your life.”

In the video, which is set to the hit song “This Is How We Do” by Katy Perry, the mom can be seen standing with her son’s phone in her hand while her son looks down at the phone in the background and she lip syncs “it’s no big deal” over and over again.

Over the video, it says, “Me every time I look through my teenager’s phone,” followed by some unimpressed and uncomfortable emojis, as if she’s trying to convince herself that what she’s seeing is “no big deal.”

She said that she also checks her 17-year-old daughter’s phone, but she says it’s to stop them from spending all night on social media.

“I own their phones, and I pay for their phones,” she told the New York Post. I can look at them any time I want.

“Some people might think it’s rude or an invasion of privacy, but this is how I run my ship.”

But other TikTokers didn’t like what she did, and they told her she was acting in a bad way.

One person wrote, “Checking your child’s phone is a violation of their privacy and a sign that you don’t trust them. They will never talk to you again.”

Another person wrote: “I’ve never looked through my kids’ phones. They have never given me a reason to.”

One teen said, “When my mom looks through my phone, I delete half of what’s on it.”

Someone, though, defended the mom by saying, “My daughter had to turn in her phone every night before bed, and yes, I did look at it. It’s to keep them safe.”