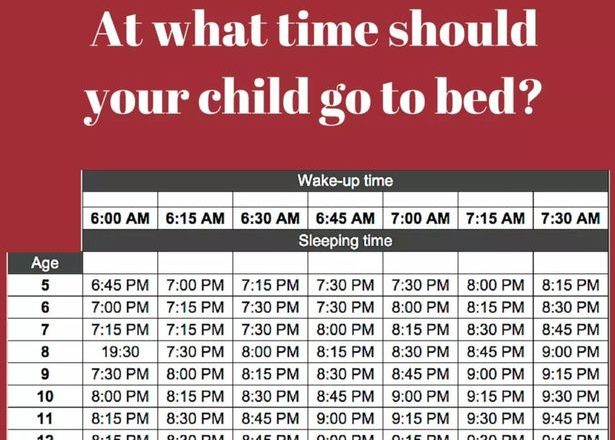 When it comes to children, parents want to make sure they’re setting them up for the best day possible by ensuring they’ve had a good night’s sleep and a healthy breakfast to give them energy.

But when is the appropriate time to put your child to bed?

A teacher gave an interesting approach to bedtime and getting up in the morning, organized by age group.

The tweet, which was shared by an educator from Wilson Elementary School, isn’t new, but it has recently reappeared on social media and sparked a commotion among many parents who were divided over the timings.

She stated: “It surprised me [how widely the post was spread]. It’s not anything I made up. It came on my personal page and I thought, ‘Wow, this is really helpful.'”

Some parents agreed with Stacy that the chart was an excellent resource. One mother stated it “justified” the bedtimes she had already established for her children.

“I have four kids,” she continued, “and I get a lot of flak for their bedtimes.” “Years ago, I began fixing their bedtime based on how much sleep they require…

I’m glad to see that this chart validates the times we’ve already specified.”

However, not everyone was as taken by it. A different parent compared the strict requirements to military service.

He contended: “This isn’t the military, and if I put my kids to bed at 7, they’d be awake at 4 a.m. Thank you very much. In addition, I would never be able to spend time with them after school.”

Another person added: “I’m sorry, but this chart is ridiculous. Who puts their child to sleep at 6:45 p.m.?”

Others believed that bedtime regulations should vary based on the month and if the youngster had napped during the day.