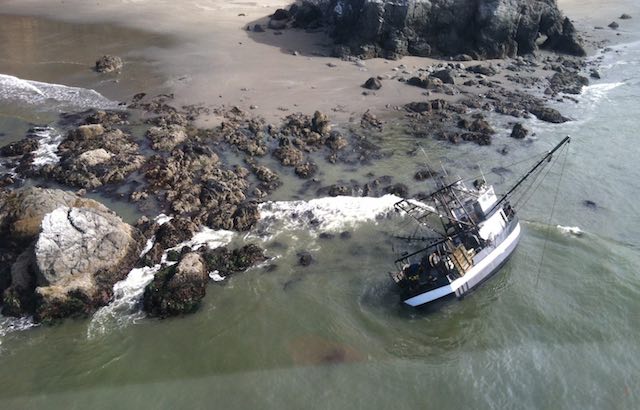 A Coast Guardsman who went out into high waves to respond to a distress call was able to overcome both the strong gusts and the extremely cold water that threatened to kill him.

In the early hours of Tuesday morning, a Coast Guard helicopter was dispatched to the location of a sinking commercial shrimp fishing boat with a length of 52 feet to rescue the crew of the vessel.

The boat had run out of power and was taking on water when the four-person crew abandoned ship and made their way to a life raft in the ocean off the coast of Oregon. When the chopper arrived, they were bouncing about in waves that were five feet high.

Petty Officer 2nd Class Darren Harrity was dropped into the water, which was 57 degrees, by the helicopter.

Because the hoist was broken, he was unable to secure a harness to each of the survivors so that they could be hoisted back onto the aircraft.

As a result, none of the survivors were able to be rescued by the helicopter. Therefore, the petty officer had no choice but to implement Plan B and have the survivors swim the last 250 yards to the shore. one after the other.

He must have swum back and forth for more than a mile in all. The helicopter remained in the air, but its crew could do nothing except watch as Petty Officer Harrity made those four journeys between the life raft and the shore in order to save all of the fishermen.

Eventually, he succeeded in doing so.

Before beginning his four excursions to shore, Harrity reportedly had a conversation with each individual and managed to calm them down.

This information was provided to KOIN News. On the shore, paramedics were waiting, and all four people who managed to survive are in good shape.

His Coast Guard Commander, Robert Workman, lauded the rescue swimmer for doing a “great job” in bringing the crew to safety “despite waves, surf, and darkness.” Workman said that the swimmer made it through all three elements successfully.