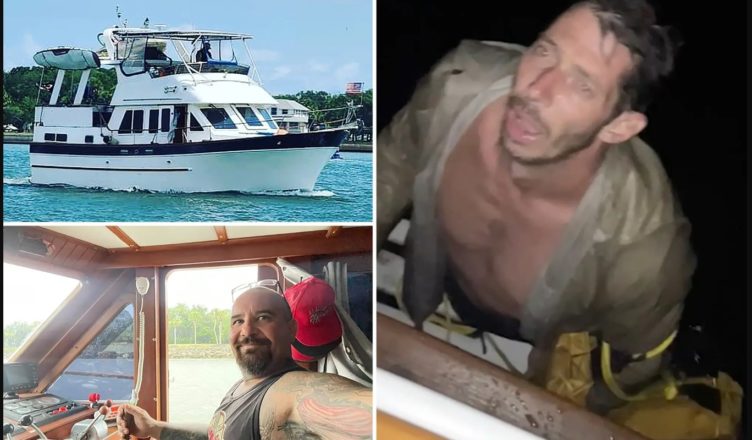 A Florida boat captain became a hero when he saved an unexpected person from the ocean, and he caught the whole thing on camera.

Tom Korinek, who was in a boat, found kayaker Davey Wright on June 28 after he had been at sea for several hours.

Korinek, who is also known as “Trawler Tom” on TikTok, recorded the conversation and shared it with his social media followers.

In the clip, a messy Wright stood up on the side of Korinek’s boat while holding a life vest.

Wright said to Korinek in the video, “My f——— kayak went down probably, I don’t know, two and a half miles ago.” “I yelled at every boat, man.”

He told Korinek, “Thanks a lot for stopping, bro.”

The captain wrote in the caption of his TikTok video, “Just out here saving lives.” “Cruising around 4am and hear someone yelling for help.

I’m usually by myself, and take safety equipment very seriously. This man is lucky to be alive right now.”

Korinek gave more information in the video’s comments section in response to a viewer who said how happy Wright must have been to be saved.

“When I turned around I was yelling and he wasn’t yelling back. When he saw me coming, I think he was about to give up “Korinek said.

According to WPBF, Wright set out on the water on June 27 for a brief fishing trip. Then, at a sand bar two miles away, he gave his kayak to someone else, who he said must have broken it.

Around 11 p.m., when he started paddling to get back to shore, the boat started to sink.

“It’s very cold, my teeth are chattering, and my muscles are stiff. This has been going on for hours, so I’m pre-hypothermia or hypothermia.”

WPBF says that Korinek’s boat could be seen after he had been in the cold water for five hours.

Wright said, “I was yelling, “Mayday, Mayday. I’m a fisherman in the water, and I have no boat.”

Local news says that the captain drove Wright back to the dock in Fort Pierce, Florida. After a few days, they had a small party at the dock to celebrate their new friendship.

“You look out for me, Tom. God bless you for being there, “Wright told Korinek, according to WPBF.

The captain set up a GoFundMe page to help Wright get new fishing gear, a new kayak, and “some new water safety equipment and a big whistle” to replace what he lost.

Korinek wrote in the GoFundMe page that now that they are good friends, they want to start a business together that promotes water safety.