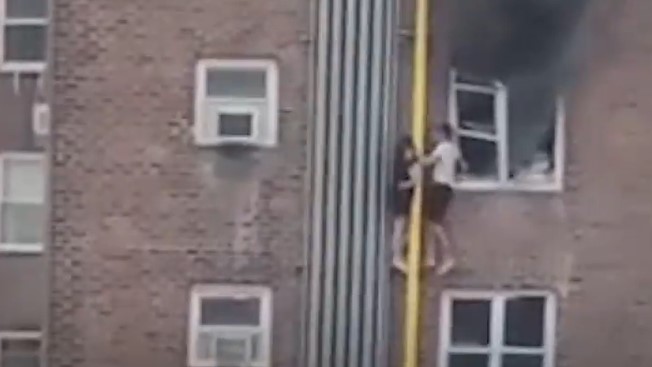 Two teenagers got out of a burning building in Manhattan by climbing out a window and sliding down an outside pipe.

The New York City Fire Department says that two teenagers were hurt when they ran away from an explosive fire that killed one man and badly hurt a woman in Manhattan’s East Village on Thursday.

A bystander’s smartphone video shows one of the teens hanging out of a fourth-floor window while thick smoke rises from nearby windows.

As one gets a hold of an outside pipe, one can also see fire blazing. The second teen then climbs out the window and holds on for dear life.

On the video, you can see and hear people yelling at the two survivors to “hold on.”

Even though the teens haven’t been named, WABC said that an 18-year-old and a 13-year-old were treated for burns and smoke inhalation after the fire on Avenue D at 7:15 a.m.

“They were about to jump out the window, but everyone kept telling them to hold on,” neighbor Tashaka Owens told the news outlet.

“So when they held on, they got on the side of the pole and started sliding down. Those kids made it down.”

In a statement, FDNY Fire Commissioner Daniel Nigro said that “their youth and athleticism” and “their ability to climb out a window and shimmy down a pipe” were reasons why the situation “was not even more tragic.”

“These flames, how quickly they spread… The fire took over this apartment, tore down a wall, spread quickly, and blew the windows out of the apartment.

That fire was raging,” Nigro said. “We got there in four minutes, but this fire was already an advance fire by then.”

He talked about what started the fire and said, “Once again, our fire marshals have found that lithium-ion batteries from an e-bike were to blame.”

Nigro says that when the fire started, there were at least seven e-bikes in the apartment.

“This fire was so strong that it blew out the windows and knocked down a wall inside the apartment right on top of where these teens were sleeping,” he said.

It’s “alarming” that lithium-ion batteries are starting fires. He said, “This year we’ve had 93 fires, more than 70 people have been hurt, and now four people have died. Another person is still fighting for their life.”

Nigro said that batteries “explode violently” when they are “damaged” or “overcharged.” He also said that the batteries shouldn’t be charged overnight or near an exit door or where people sleep.

The commissioner said, “I would rather they be charged outside or in an empty room.”

Nigro said, “This many fires in a year worries me.” “A few years ago, this didn’t happen. We all see these electric bikes everywhere, so the number of them in the city keeps going up. As their number grows, so will the danger.”

Nigro said, “This loss of life can only be stopped if we use these things right.” “Use them safely, like you would anything else.

I want everyone to know that e-bike batteries can be dangerous and to take this very seriously.”

WABC says that firefighters found a 32-year-old man dead in the apartment and took a 46-year-old woman to the Cornell burn unit at New York-Presbyterian Hospital.